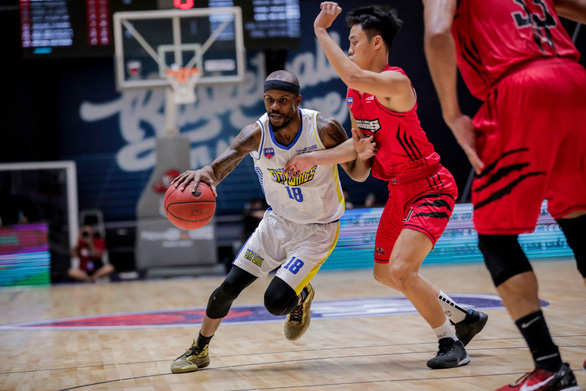 The trend in this year’s VBA season seems to be a widespread dependence on trios of two foreign players and one Vietnamese player for both defense and offense.

Both the Warriors and the Wings used this tactic successfully throughout their first games of the season.

The Warriors’ Tim Guers and Jordan Young are the two foreign players on the team’s ‘trio,’ with each able to find the net both inside and outside the three-point line.

On the Wings, veteran player Vincent Nguyen has earned himself a key position thanks to his ability to clear the court for his two foreign teammates, Makinde London and Jeremy Smith.

The Warriors and the Wings met each other in Game 9 of the VBA Premier Bubble Games - Brought to you by NovaWorld Phan Thiet at the VBA-NTU Arena, with the Warriors heavily favored thanks to their second place finish in the league last season.

Being favored, however, did not translate to a stellar performance as the Wings’ defense spent the first half of the game continuously shutting down the Warriors’ offense.

During the second half, both teams went on the attack, leading to a 79-79 tie at the end of regulation.

The Warriors got off to a weak start when team captain Thai Hung and foreign players Tim Guers and Bryan Coleman fouled out at the beginning of the overtime period.

The Wings were quick to take advantage of the Warriors’ setback and handed them their first defeat at 96-98.

The Wings’ Jeremy Smith was voted Player of the Game thanks to his strong performance and for sinking nearly half his team’s points.

The VBA Premier Bubble Games - Brought to you by NovaWorld Phan Thiet is broadcast on OnSports and two over-the-top media services, VTVcab On and Myclip.