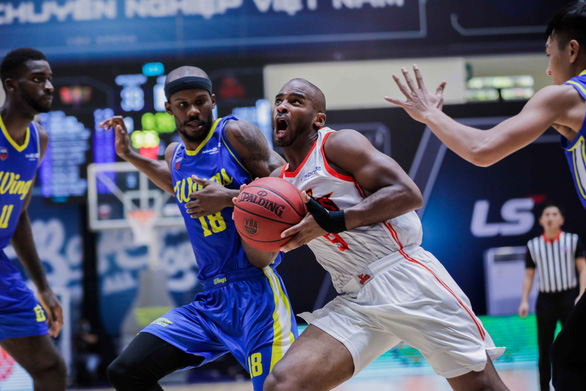 Danang Dragons pulled off a decisive victory over Ho Chi Minh City Wings in Game 19 of the VBA Premier Bubble Games - Brought to you by NovaWorld Phan Thiet.

Game 19 was the first time this season that Danang Dragons had found themselves competing head-to-head against Ho Chi Minh City Wings.

The Wings went into game 19 with a four-game winning streak under their belt while the Dragons were regarded as the underdogs after posting an even win-loss split in their last four games.

Despite the odds stacked against them, Da Nang took the lead early on and managed to hold it throughout the game thanks to a strong defensive effort that stopped the Wings' stars Makinde London and Jeremy Smith.

While Dragons diehards appreciated their team's athletic performance, it was consistently funny facial expressions by the players that captured the fans’ attentions.

One particular highlight of the game was a snapshot of the Dragons' player To Quang Trung with his eyes and mouth wide open while attempting to barrel through a strong Wings defense.

A similar snapshot of Akeem Scott, the oldest player on the court, with swollen cheeks and pursed lips as he went on a drive against the Wings also took netizens by storm.

Similarly, VBA fans eagerly shared a picture of the Dragons' player Trieu Han Minh being completely embraced by the Wings’ Smith while attempting to break through their defense.

Another funny scene from the game featured Scott trying to confuse Smith by pointing his finger away from the ball.

After four wins in a row, the Wings were favored for victory.

Unfortunately, a strong defensive showing from the Dragons shut down the Wings’ key scorer and forced several missed shots from outside the three-point line.

Scott was voted MVP of the game with 26 points, 10 rebounds, and seven assists.