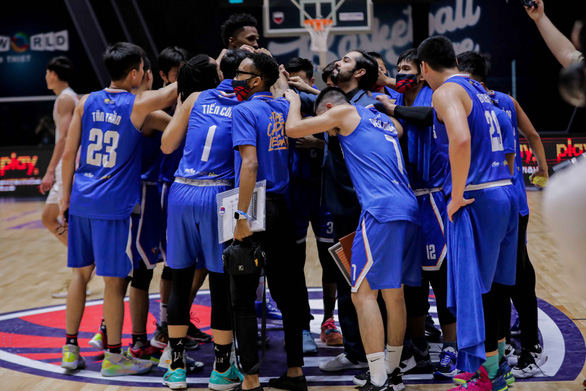 Following their impressive start at the VBA Premier Bubble Games - Brought to you by NovaWorld Phan Thiet with three victories, Hanoi Buffaloes’ four recent consecutive defeats have raised many questions.

The players and coach Eric Weissling had every confidence in their competence against other squads before the VBA Premier Bubble Games commenced.

They proved that confidence with overwhelming wins, including the respective 96-54 and 110-71 victories against the Vietnamese national basketball team and Nha Trang Dolphins.

Those performances turned Hanoi Buffaloes, especially the star trio of Sang Dinh, Mike Bell, and Anthony Moody, into a favorite in the eyes of many basketball fans.

However, that was before they ran into Saigon Heat, Ho Chi Minh City Wings, Thang Long Warriors, and Danang Dragons.

Hanoi Buffaloes lost all of their four games against those strong rivals, during which they were often caught unprepared in decisive moments.

During that stretch, their games against Saigon Heat and Danang Dragons caused the most regrets for the Buffaloes as they narrowly missed winning on each occasion.

A series of mistakes by the Buffaloes at the end of each match, however, cost the team the wins.

In terms of strength, Hanoi Buffaloes is considered a strong team at the VBA Premier Bubble Games with many stable players, notably Mike Bell, who is likely to end up among the top three players with the most Most Valuable Player (MVP) titles of the season.

As a united, good team, passionate coach Weissling’s players have more to improve to become a real force at the VBA.

Danang Dragons took on Hanoi Buffaloes in Game 30 of the VBA Premier Bubble Games - Brought to you by NovaWorld Phan Thiet.

After three losses in a row, Hanoi Buffaloes was determined to improve their performance, but they were facing the veteran players of Danang Dragons.

The two teams contributed to an extremely satisfying competition, whose result was only decided at the last minute when Trieu Han Minh finished with a precise three-pointer, creating an advantage to help the Dragons clinch the 97-91 victory.

With 33 points and 14 rebounds, Akeem Scott of Danang Dragons once again won the MVP title.