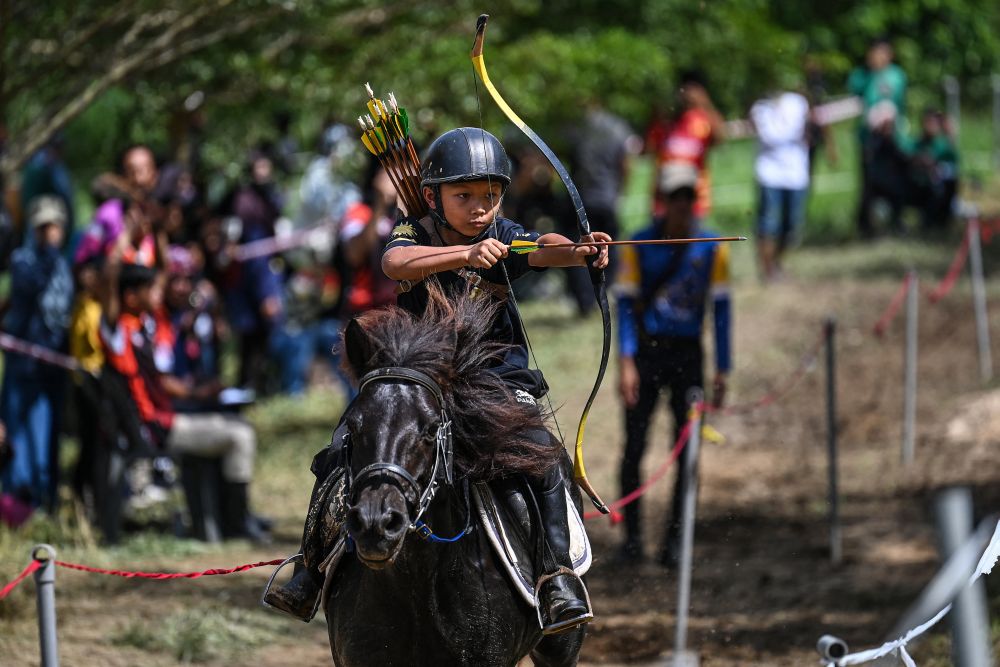 Riding a galloping horse under the blazing sun, Malaysian archer Zaharudin Rastam Yeop Mahidin fires an arrow at a target as a crowd cheers.

This is horseback archery, which was common for thousands of years in hunting and warfare but declined with the introduction of firearms and other modern combat gear.

Now it is getting a revival as a niche sport, gaining a growing following in Malaysia and among a small number of enthusiasts worldwide.

Wearing a traditional outfit associated with the country's ethnic Malay Muslim majority, Zaharudin was one of 28 riders competing at a tournament in central Rembau district.

The 59-year-old veteran archer said it was the most challenging but rewarding sport he had ever tried.

"It's a blending of mind, body and spirit at its best," he told AFP.

"The mind has to be focused on the task at hand. The body must conform to what's needed... handling the bow and arrows on a moving horse.

"And the spirit -- you have to trust the horse."

Riders at the tournament had to try to hit nine targets within 30 seconds as they galloped along a 200-metre (650-foot) track, and were judged on their accuracy and speed.

The tournament was established in 2018 and has been held several times since, but the recent edition was the first in nearly two years due to coronavirus curbs in Malaysia.

It is also a relatively expensive sport to get into, given the cost of keeping horses and the fact there are only a few places in the country to learn it.

But it is becoming more popular in Malaysia, with about 100 people taking part, and the sport's tight-knit community hopes to entice sponsors and government support, and make it more accessible to the wider public.

Its following has also grown worldwide, with tournaments held in countries from Europe to Asia in recent years.

For Malaysia's Muslims, who comprise more than half of the country's 32 million people, the sport has an extra appeal as the Prophet Mohammed encouraged both horse-riding and archery.

"People see this as an opportunity to practise the 'sunnahs' (traditions and practices of the Prophet)," said Zarina Ismail, owner of the Cape Cavallho Equestrian Club, where the tournament took place.

But for many, the sport's difficulty is a major draw.

"It's a challenging sport -- and Malaysians like a challenge," said Syed Abdul Muiz Syed Alias, president of the As-Sibaq Malaysian Horseback Archery Association.