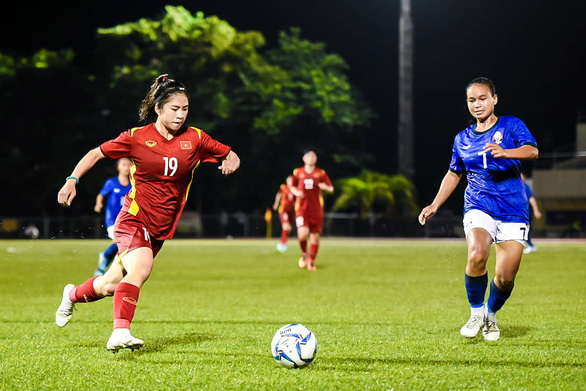 Vietnam kicks off AFF Women’s Championship with victory over Cambodia

Vietnam beat Cambodia 3-0 in their group-stage opener at the 2022 AFF Women’s Championship in the Philippines on Thursday.

The rain and artificial grass at Binan Stadium in the Philippines affected Vietnam’s style of play.

The Vietnamese team tried to keep possession of the ball by initiating long passes through the first minutes of play.

The tactic proved effective when a pass found Ngan Thi Van Su behind Cambodia’s defense in the 20th minute.

Su was able to curl the ball into the side of the goal.

Four minutes later, Vietnam almost conceded when keeper Khong Thi Hang was caught off guard and let the ball sail past her, though it wound up hitting the post.

Pham Hai Yen made it 2-0 for the reigning champions in the 32nd minute by beating Cambodian goalkeeper Chea Sompors from a penalty shot after the latter fouled her inside the box.

Shortly before half-time, Hai Yen offered a clever pass to Nguyen Thi Thanh Nha who dribbled the ball past a Cambodian defender and added a third goal for Vietnam.

In the second half of the match, Nguyen Thi Tuyet Dung and Huynh Nhu left the bench to help put continuous pressure on Cambodia.

Although Chung’s troops piled tremendous pressure on the Cambodian side, the 3-0 score remained unchanged until the final whistle.

The AFF Championship is being played in Manila from July 4 to 17.

Vietnam, who won their third title at the most recent edition of the tournament in 2019, are sorted into Group B with Myanmar, Timor Leste, Laos, and Cambodia.

Thursday’s victory helped the title holders provisionally sit third in Group B on three points, behind Myanmar on goal difference.

Earlier the same day, Laos had beaten Timor Leste 2-0 to temporarily stand at the top of the group with four points from two matches.

Vietnam will take on their Laotian opponents on Saturday.