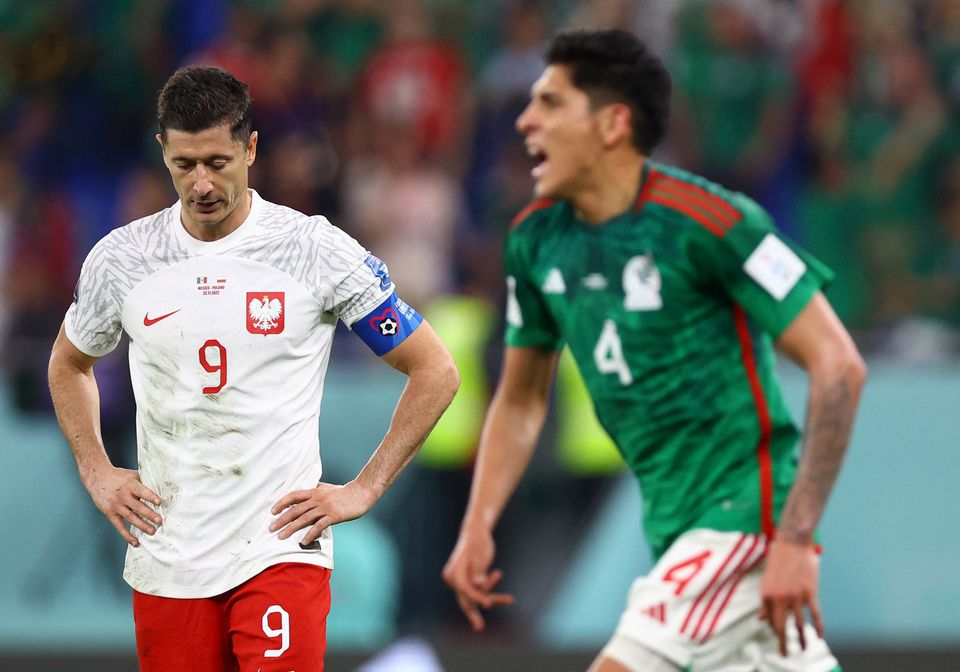 Poland and Mexico played out an entertaining 0-0 draw in their opening Word Cup Group C game on Tuesday, with Polish skipper Robert Lewandowski failing to break his tournament duck when his second-half penalty was saved at Stadium 974.

Lewandowski earned the penalty after a VAR check 11 minutes into the second half when Hector Moreno tugged at his shirt. However, the striker, who has never scored at the World Cup, saw his shot saved by Guillermo Ochoa.

"Today I feel sorry for Robert, because I know how much he wanted to score at the World Cup," Poland coach Czeslaw Michniewicz said.

"So far he has not succeeded, but I hope that in the next opportunities that lie ahead of him he will convert them into goals."

The result leaves Saudi Arabia as surprise group leaders following their stunning 2-1 upset of Argentina, one of the pre-tournament favourites, earlier on Tuesday.

In a temporary arena built using 974 recycled shipping containers that overlooks the Arabian Gulf, a sea of Mexico fans in green outnumbered their Poland counterparts and made their presence felt in the 40,000-capacity venue.

The Mexicans gave a stirring rendition of their national anthem that reduced winger Alexis Vega, who is playing at his first World Cup, to tears.

Right after kickoff the fans raised the volume with a Mexican wave that swept through the stands while the unique metal structure of the stadium reverberated as they bounced up and down with chants of "Mexico, Mexico!"

A flowing game of few fouls but fewer chances came to life around the half-hour mark when Vega saw his header fly wide before Jesus Gallardo was denied with a last-man tackle when he had an open goal at his mercy two minutes later.

Mexico had the bulk of possession but without Raul Jimenez spearheading the attack, Henry Martin struggled to get on the end of chances in the box.

At the other end, Poland failed to get Lewandowski involved as the Barcelona striker - who has scored 18 goals for the Spanish club this season - received little service. Both keepers finished the first half without having to make a save.

As Poland struggled to impose themselves, the Mexican fans chanted "Ole" for every pass their team completed.

With Poland losing the midfield battle, coach Czeslaw Michniewicz made a halftime substitution by hauling off Nicola Zalewski and bringing on central midfielder Krystian Bielik, which allowed Piotr Zielinski to play in an advanced role.

The tactical change seemed to work initially as Poland created chances and eventually won the penalty as Moreno desperately tried to prevent Lewandowski from taking a free shoton goal.

After a lengthy VAR check, Lewandowski stepped up to take the penalty and as both sets of fans in the stadium held their breath, he shot low but Ochoa dived to his left to deny the Pole before his team mates cleared the danger.

Ochoa, who forged his reputation as a reliable shot-stopper who ups his game at World Cup tournaments, was fired up after the save while the Mexican fans jeered as Lewandowski held his head with both hands.

"We worked on that (watching Lewandowski videos) with the goalkeeper coach for a month," a smiling Ochoa said.

"It's always difficult to watch his penalty videos, you watch more than 15-20 penalties, so you never know which side to choose. In the end I'm happy to save the penalty, he's a great striker."

Not to be outdone by Ochoa's brilliance, Polish keeper Wojciech Szczesny underlined his credentials moments later when he reacted quickly to change direction and keep out Martin's glancing header.

Mexico coach Gerardo Martino eventually brought on Jimenez with 20 minutes to go in the second half to replace Martin but the Wolverhampton Wanderers striker returning from a long injury lay-off failed to have a shot on goal.

"We were on the front foot in the first half, we deserved an advantage at halftime," Martino said, adding that they became "predictable and cautious" as the game wore on.

"The penalty was a mistake from us but in general terms I think we should have won the game given what we did in the first half."