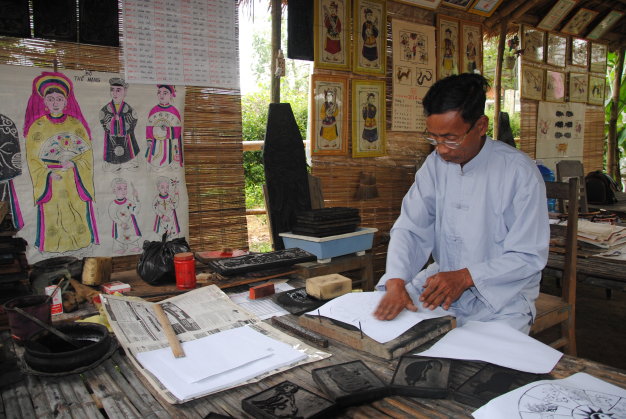 Sinh Village, located on the banks of the province’s hallmark Huong (Perfume) River, was established in present-day Phu Vang District more than 400 years ago.

The village’s folk paintings bear resemblances to Dong Ho and Hang Trong folk woodblocks, which are native to Bac Ninh Province and Hanoi, respectively, in the northern part of the country.

However, their origin remains inconclusive.

According to Ky Huu Phuoc, a veteran local artisan, during the reign of the Nguyen Lords (1558-1777), the predecessors to the Nguyen Kings – the country’s last monarchy – Ky Huu Hoa, a migrant to the region, brought along his woodblock-making techniques.

Hoa is believed to be the father of Sinh Village woodblocks.

The simple woodblocks originally depicted images of worship and religious life, and mainly expressed local hopes for prosperity and happiness.

Phuoc recalled that back in the 1990s, the Sinh Village paintings were considered superstitious, and many were confiscated and destroyed.

“Anticipating this, I put all my heirloom woodblock moulds into wooden trunks, which I then buried in the garden. Maybe it’s my destiny to retain and restore the long-standing art,” he shared. The beauty of Sinh Village woodblocks is derived from vivid colors and images created by artisans. The images make the paintings stand out and differ from one another.

Unlike Dong Ho paintings, which have only four or five principal colors, Sinh Village woodblocks are diversely colored.

The colors are mostly made from natural elements, including leaves, seeds, ash and brick powder, which are skillfully blended to create a variety of colors.

Artisans also take great pains to obtain a special type of oyster, which is richly colored and has a thin shell.

The shells are grated into a fine powder, which is then mixed with glue.

The mixture is then applied twice onto “do” paper, a traditional type of paper, to create “diep” paper.

To better promote and sell the paintings to tourists, Phuoc has diversified the content of his woodblocks to include new themes such as folk games, daily activities, and landscapes.

Phuoc noted that it is quite hard to bring the woodblocks to other regions or out of the country, as “diep” paper and paint easily decay without proper preservation.

The large size of the paintings also deters tourists from bringing them home.

To solve this problem, Phuoc has created a bamboo pipe which he rolls the paintings into, enhancing the durability, mobility and appeal of his works.

He also inscribes the Sinh Village signature, his name, and phone number on the bamboo pipe.

His initiative and efforts have paid off, helping him sell a considerably larger number of paintings to tourists each year.