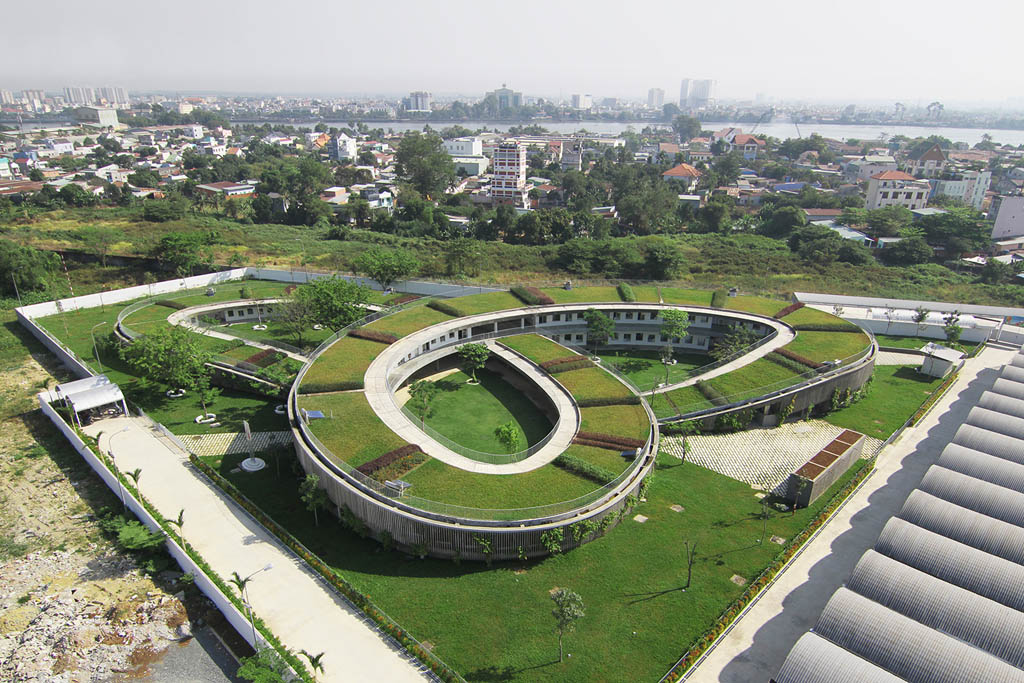 The Farming Kindergarten in southern Vietnam has won the Educational Architecture category of the 2015 Building of the Year Awards given away by architecture website www.archdaily.com.

Designed by Vo Trong Nghia Architects, an award-winning Vietnamese company, the nursery was built on the concept of a “Farming Kindergarten” with an evergreen roof that provides food and agriculture experience for Vietnamese children, as well as safe outdoor playgrounds, according to the company’s website.

“The building [located in Dong Nai Province] is made of a continuous narrow strip with two side operable windows which maximize the cross ventilation and natural lighting,” ArchDaily said when introducing the kindergarten capable of teaching 500 preschool children.

“Additionally, architectural and mechanical energy-saving methods are comprehensively applied including but not limited to: green roof as insulation, green facade as shading and solar water heating,” the architecture website added.

The structure is designed for the children of factory workers, who earn a low income, so the construction cost was only US$500 per square meter, including finishes and equipment, which is competitively cheap even within the Vietnamese market.

Founded in March 2008, ArchDaily is the most visited architecture website worldwide with over 300,000 daily readers and about 70 million page views per month, according to Wikipedia.

Annually, ArchDaily organizes the Building of the Year Awards in which the winners are chosen by a vote of the 60,000 architects who are members of the site.

Set up in 2006 by architect Vo Trong Nghia, Vo Trong Nghia Architects Co. has more than 60 international architects, engineers, and staff working closely on cultural, residential, and commercial projects worldwide, according to the company’s website.

Vo Trong Nghia himself is an award-winning architect who has received numerous international awards for his environmentally-friendly designs.

Nghia’s Binh Thanh House in Ho Chi Minh City was recognized as Building of the Year by ArchDaily last April.

Last month, he was featured in one episode of CNN’s Ones to Watch program, which aims to shine a light on up-and-coming creative talent set to be the next big names in culture and the arts.

In October, the Nghia-designed FPT Technology Building at Hoa Lac High-Tech Park, 34km from the Vietnamese capital city of Hanoi, won the Education category at the 2014 World Architecture Festival.

In 2012, Nghia carried off 11 international architecture awards of various categories.