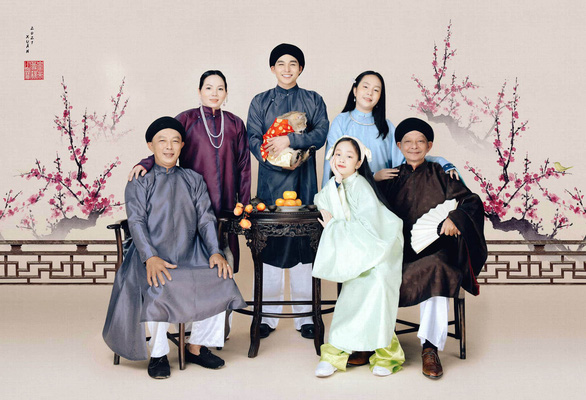 “Ao dai ngu than” (literally ‘five-piece ao dai’), a traditional Vietnamese garment many thought died out with the end of the Nguyen Imperial Dynasty, seems to be making a comeback amongst Vietnamese youth, according to cultural expert Dr. Thai Kim Lan.

But what makes ao dai ngu than different from modern ao dai?

“The [feudal-style] ao dai has five long flaps which represent the parents, parents-in-law and the wearer. Its five buttons symbolize the five constant virtues of a decent person – kindness, decorum, uprightness, wisdom and faithfulness,” Dr. Lan, explained, adding that the style of dress was first created 200 years under the direction of Lord Nguyen Phuc Khoat.

Ao dai ngu than, the precursor to modern ao dai, has been growing in popularity among young Vietnamese over the past few years, with communities dedicated to the period dress, such as Vietnam Centre, Dinh lang Viet, and Dai Viet Co Phong, thriving on Facebook.

Local tailors, including Y Van Hien, Hoa Nien, and Great Vietnam are also playing their parts in bringing a more traditional style of ao dai to the masses.

During holidays and traditional festivals – times when many Vietnamese don ao dai for photoshoots – it seems many young Vietnamese are opting for ao dai ngu than and proudly sharing their pictures in the ancient style of dress on social media. Filmmakers have also been getting in on the hype by incorporating the vintage design into their productions.

“I’m glad that our youth are gradually picking up interest in domestic culture. Vietnamese culture is as diverse and nuanced as any other culture,” Vietnamese singer Jun Pham expressed in a statement to Tuoi Tre (Youth) newspaper.

During the 2021 Lunar New Year holiday, ao dai ngu than was far and away the most popular outfit amongst Vietnamese social media users, including Jun Pham, who proudly posted pictures of his celebrations with family, all of whom were wearing ao dai ngu than and nhat binh (a traditional Vietnamese royal costume).

“As an artist, I try to work on projects that incorporate Vietnamese culture.”

An expert on Vietnamese culture, Dr. Thai Kim Lan is equally excited about the current ao dai ngu than revival.

According to Lan, ao dai ngu than is bona fide Vietnamese attire that has been optimized for the body type and daily activities of the Vietnamese people.

Lan also noted that ao dai ngu than is not exclusive to woman and its cuts also compliment the male figure.

Online communities dedicated to historical clothing are serving as gateways for many young Vietnamese to learn more about the history of ao dai.

These forums tend to attract passionate ao dai lovers, young hobbyists, and even culture experts, some of whom are diehard traditionalists who denounce any modifications to the form and shapes of the original five-piece design.

The country’s youths are proving themselves to be the powerhouses of the ao dai ngu than revival movement, with youth-led brands gaining a foothold in the community.

New and popular ao dai ngu than makers include Hoa Nien (Beautiful days), a project founded by fashion students at Ton Duc Thang University in Ho Chi Minh City, while the products inspired by the Nguyen Dynasty’s imperial attire at TONS and the classic form and dyeing technique used by Great Vietnam and Dong Phong were also created by young cultural enthusiasts.

A garment that survived many discrete eras of Vietnamese history, the five-piece ao dai has also undergone many adjustments, including the controversial design known as “contemporary ao dai” which has sparked recent controversies over how far its strayed from tradition.

According to Thai Kim Lan, the five-piece ao dai is even more “modern” than contemporary variations, as it upholds a different set of standards in terms of size, design, and color coordination which complement the grace and style of the Vietnamese wearer.

Lan sees the renunciation of lackluster designs under the name of “contemporary ao dai” a positive signal, reflection of an elevated taste in fashion amongst Vietnamese youth.