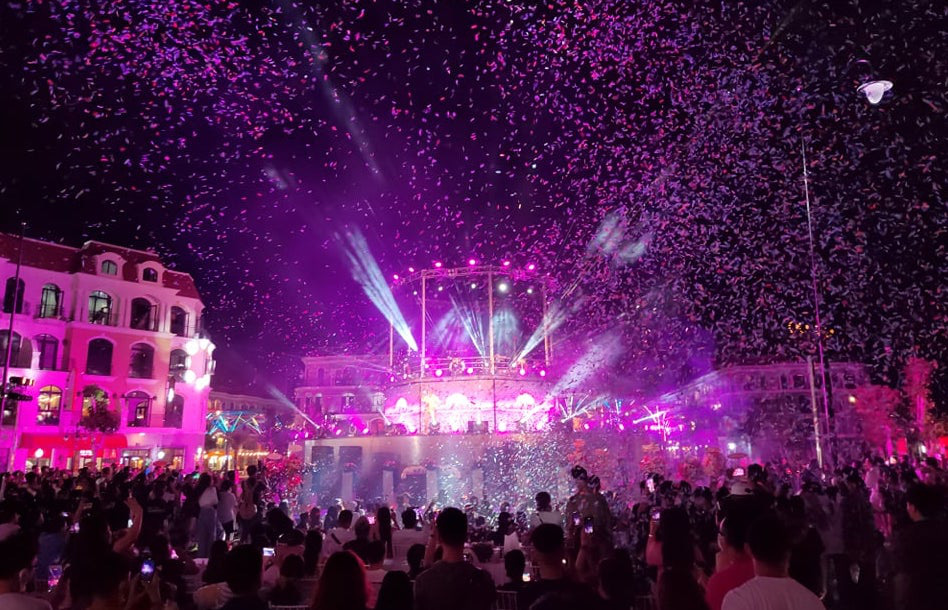 Speaking at the opening ceremony, Le Khac Hiep, vice-chairman of Vingroup, said the inauguration of Phu Quoc United Center will help the island grow rapidly and soon become an important economic center in southern Vietnam, as well as a paradise for tourism and luxury resorts not only in the country but also in the region.

It will lead to a new stage of development for businesses that have had a close and long-term relationship with Phu Quoc, including Vingroup.

"Since 2014, Vingroup has implemented ambitious projects with a long-term vision," Hiep stated.

“Phu Quoc United Center is a comprehensive ecosystem and a tourist destination that is able to meet all visitors’ needs.

"An inter-level school will also be established on the island in the coming time.”

Phu Quoc – Vietnam’s first island city – is granted a lot of special mechanisms and policies to promote economic and tourism development, according to Huynh Quang Hung, chairman of the Phu Quoc People’s Committee.

A total of 328 projects worth up to US$16 billion have been established by major corporations on the island so far, Hung continued.

The number of visitors to Phu Quoc increases 25-30 percent every year, he said, adding that the island is expected to welcome three million visitors, who are mainly domestic tourists, in 2021.

Ry, a foreign visitor who has been in Vietnam for a year, said he was extremely excited at the opening of Phu Quoc United Center – an all-in-one resort complex.

Rod Beriver, a Canadian businessman, said he was surprised by the magnificence and cleanliness of the super tourism-resort-entertainment complex, especially the replica of Venice’s Grand Canal, which made him feel like he was in modern and glamorous Europe.

Beriver came to Vietnam about seven years ago and is running a business inside Phu Quoc United Center.

This ‘sleepless city’ can totally be compared with other leading destinations in Asia such as Japan and Hong Kong, the Canadian man added.

Vietnamese singer Dang Khoi arrived at Grand World, part of the Phu Quoc United Center, not only as an artist but also an investor since he owns a shophouse in the complex.

“I've been looking forward to the grand opening of the complex and hope it will become an attractive tourist destination in the future," Khoi said.

"I believe this 'sleepless city' will spur Vietnam’s tourism in the coming time."

Nguyen Duc Duy, a Ho Chi Minh City resident, said he landed in Phu Quoc on Wednesday morning on the occasion of the Hung Kings Festival.

Duy and his friends rented some bicycles to tour the Grand World and planned on partying all night long following the opening ceremony of Phu Quoc United Center.

"I cannot believe Vietnam has such a unique and spectacular entertainment compound," the visitors exclaimed.

Pham Van Anh, who resides in Duong Dong Town, Phu Quoc City, said she is happy that her hometown has such a special entertainment complex.

“I hope that Phu Quoc will continue to develop so that more tourists will come to and fall in love with the island,” Anh remarked.

The woman added her family had spent VND150,000 (US$6.5) on an enjoyable boat ride along the Venice Grand Canal.

About 300 agricultural products and specialties of various localities were also presented to visitors in the ‘sleepless city.'

Open from 6:00 pm to 6:00 am daily, NightZone 68 is the first model to be developed in the night economic complex, Son elaborated.

“The night economy here is an example of a 'sleepless city,' which is completely different from the night streets in other urban areas," he elaborated.

The largest bamboo construction in Vietnam, named Bamboo Legend and designed by famed Vietnamese architect Vo Trong Nghia, is made from more than 32,000 bamboo trees with curved arches inspired by traditional and unique communal houses of the Southeast Asian country.

The museum houses over 500 teddy bears, including the first teddy bear to be manufactured in the United States.

Recognized as the 3D multimedia show with the most Vietnamese historical references, ‘The Quintessence of Vietnam’ show comprises nearly 3,000 daytime mini-shows and 365 nocturnal events each year.

The show recreates the life, culture, and history of Vietnam in ancient times and conveys profound traditional and cultural messages.

Recognized as Vietnam’s largest floating multimedia show inspired by European culture, ‘The Color of Venice’ super show has a 15,000 square-meter underground stage and the most advanced equipment, recreating the picturesque Venice through Waltz dances, lighting, music, and performances on the water surface.