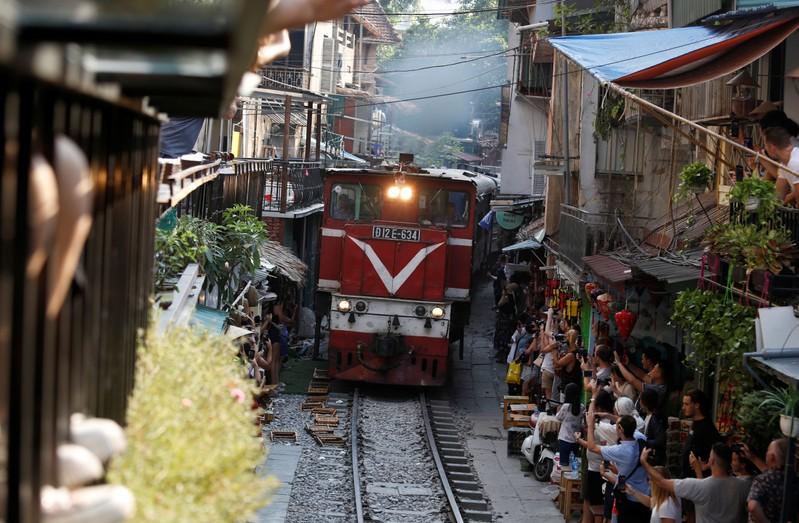 The situation of vendors selling street food and tourists filming and photographing near rails, violating railway traffic safety, has recurred in some districts in Hanoi with railways passing through in recent days, according to the Vietnam News Agency.

The Hanoi Railway under the Vietnam Railways Corporation asked for assistance from the People’s Committees of Ba Dinh and Hoan Kiem Districts and related wards, where the encroachment has repeated, to handle the issue thoroughly.

Vendors started selling beverages along the corridor of the Hanoi - Dong Dang railway route, which snakes through several crowded neighborhoods across the two mentioned districts, around the beginning of 2018, according to the Hanoi Railway.

The operation of the coffee shops just inches from the active railway attracted foreign tourists and local people to this area to take photos and videos, especially when a train passed by.

The authorities implemented many drastic measures, including coercive clearance and making records of administrative violations, and the situation basically ceased in October 2019.

However, the Hanoi Railway saw the cafés resume operation along the railway route’s sections in Hang Bong, Cua Nam, and Dien Bien Phu Wards, though without encroaching upon the safety corridor, during an inspection on August 3, until the recent four-day break to celebrate Vietnam’s National Day (September 2).

The railway safety corridor violations in those areas have since recurred, with visitors gathering and photographing near the tracks again.