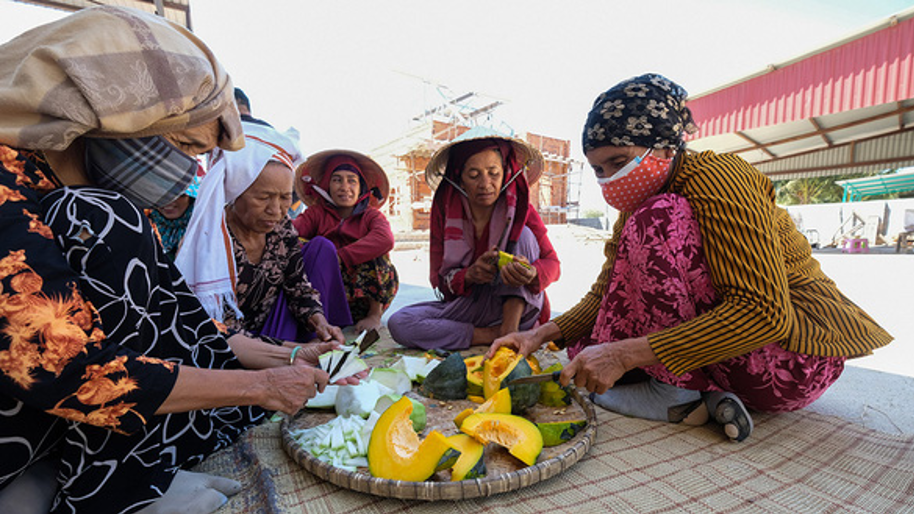 Burdens stack further on the barren land of Van Lam 3, a Cham-majority village in south-central Vietnam, as two local men have been diagnosed with the novel coronavirus disease (COVID-19).

Van Lam 3 Village in Ninh Thuan Province is home to some 1,000 households with a population of approximately 5,000, most of whom are of Cham ethnicity.

Two of their residents have been diagnosed with COVID-19 after flying home from a Malaysia visit.

The local people have been referring to COVID-19 as “the viral drought,” juxtaposing the equally devastating impacts of the disease with those of an ongoing drought that has wreaked havoc on the land for over a year.

From scorching sun to ‘the viral drought’

According to locals, Van Lam 3 has gone more than 12 months without noticeable rainfall, leaving the land too arid for farming.

Not even weed has survived the drought. Amid the muted brownish hue of the field, one does not struggle to find herds of lambs plowing the soil in search of grass roots to feed on.

The two COVID-19 infections, patient No. 61 and patient No. 67, and the total lockdown that followed only came to worsen the local people’s situation, as temporary jobs are only available outside of the village.

“[We] can’t go outside to seek work or go to the market [to vend items] while most of us are poor people living paycheck to paycheck,” said Kieu Thi Dan, a villager.

“We are going to struggle severely this year compared to previous years.”

The Van Lam 3 populace are mostly Cham people who lead a collectivist lifestyle with concentrated housing isolated from the fields, where they earn their livelihood primarily from farming and free-range cattle raising.

Their thousands of cattle, mostly sheep, are especially at risk during the lockdown.

“The sheep are already dying from the drought. Under the lockdown, we are also unable to find grass to feed them. It would be the end for us if they die,” said Truong Thi Truc Dinh, who owns 2,000 sheep in Van Lam 3 Village.

Adherence and obstacles under quarantine

Dan made no attempt to hide her fear of COVID-19: her family have even been sleeping with face masks on.

Her neighbors share the same sentiment as they stay behind closed doors and sporadically feel their foreheads with the back of their hands for signs of fever.

It was the perfect feeding ground for false rumors about the disease that have spread quickly since the first infection in Ninh Thuan was announced. In response, local authorities have been using loudspeakers to disperse verified COVID-19 updates and information.

Strict quarantine measures have been introduced since March 18 including movement restrictions for all residents in Van Lam 3. All 16 entrances to the village are now barricaded.

Van Lam 3 residents from the outside were allowed to enter the quarantine zone but are not allowed to leave until the lockdown is lifted.

Authorities also advised villagers who were outside of the quarantine zone when the lockdown was imposed to stock up on enough grass to feed their cattle during the isolation period before re-entering.

“The people’s concerns are totally valid. In this situation, one of our priorities since the epidemic was announced [in Ninh Thuan] has been to support our residents on many levels,” said Ba Van Canh, chairman of Phuoc Nam Commune in Thuan Nam District, where Van Lam 3 Village is located.

“As food is indeed of top importance, we are preparing rations for the people during quarantine. We will make sure that no one is left hungry,” he said.

“Regarding the cattle, we will work closely with our people to figure out a solution to keep them fed."

On March 18, along with quarantine orders, the administration of Phuoc Nam Commune also declared a commune-wide restriction of large public gatherings to prevent cross infection.

This decision inevitably affects the Muslim community in the area.

According to Lai, participants in religious services during this year’s Suk Yong will be restricted and all rites will be conducted within one hour.

Lai also expressed his belief in the followers’ awareness about COVID-19. The majority of people have refrained from leaving their houses except when they purchase essentials such as food, he said.

Religious leaders have also done their part on informing the community of medical safety guidelines.

Daily prayers at local mosques have also been halted, with two mosques entirely shuttered due to the epidemic. Followers are instructed to practice rituals at home.

Answering from an isolation ward in Ninh Thuan, Chau Van The, leader of a mosque in Van Lam 3, said all activities at the mosque were immediately ceased upon the news that a mosque goer had caught COVID-19, Vietnam’s patient No. 61.

The administration of Phuoc Nam has advised newlyweds and families to opt for brief wedding ceremonies over big gatherings.

They said that in light of the isolation of clergy members, weddings of the local Muslim community would most likely be canceled due to the lack of religious authority to perform required rituals.

The only two COVID-19 positive cases in Ninh Thuan so far are both residents of Phuoc Nam Commune, Thuan Nam District in Ninh Thuan Province.

They are the 61st and 67th infection confirmed in Vietnam, respectively.

The two patients were part of a congregation of 90 Muslims from the provinces of An Giang, Tay Ninh, Ninh Thuan, and Dong Nai, as well as Ho Chi Minh City, who traveled to Malaysia from February 27 to March 4 to attend religious ceremonies at Seri Petaling Mosque in Kuala Lumpur.

In light of the two cases, the Government Committee for Religious Affairs has requested Vietnamese Alliance Churches and the Catholic Bishops' Conference of Vietnam to halt mass public gatherings for the upcoming Easter celebrations.

The committee also tasked local religious committees and boards of representatives of local Muslim communities with detecting members of the congregation that went to Malaysia and informing followers of self-isolation requirements, medical clearance, and tests available at local health centers.

The novel coronavirus known, which first emerged in the central Chinese city of Wuhan in December 2019, has infected over 337,000 people and killed more than 14,600 globally as of Monday morning, according to Ministry of Health statistics.

Vietnam has confirmed 116 infections, with 17 having walked out of the hospital free of the virus by Friday last week.