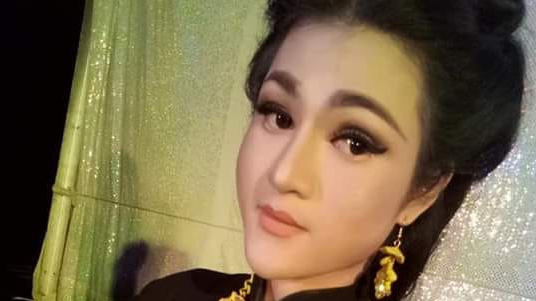 A country funfair singer in Khanh Hoa Province took a loan around 200 times her performance income for a gender reassignment surgery following her inner desire to be truly female. Her medical operation coincided with the COVID-19 pandemic, which has caused big trouble as she tries to pay off her debts.

“Even if I have to burn the candle at both ends to pay my debt, I am willing to take the risk,” said Du Kha Ai.

This amount would be affordable to those colleagues of hers who came from a better financial background.

Ai, however, would never save up enough.

The only way for her to live out her dream was to take out a loan.

The singer only earns around VND500,000 ($22) at most for a performance despite being an old hand at the job.

“But I don’t have gigs every day, and it’s not that much every time," she said.

In February 2020, an old friend agreed to lend her the amount needed for the operation.

“I couldn’t wait. I got the money and the only thing I could think about was to get this done as soon as possible,” she said.

It was a successful operation and Ai fully recovered afterward with no medical complications.

“It certainly hurt a great deal, but it was my choice so everything was within my pain threshold,” she added.

“Once you find yourself looking better in girls’ clothes, you will have a dream to become a complete girl."

Ever since her female physique was completed, Ai has projected an image of joy and satisfaction. Her dream has come true.

“I am more confident now when I’m out on the streets. I’m no longer reserved as before,” she said.

“I no longer need to wear masks. I can even stand in public and freely talk to anyone.”

From her account, there were quite a lot of concerns before the operation date.

There were the questions of the success rate of the surgery and the recovery process, but now that those questions have been answered, the only thing on her mind is the debt.

“It’s VND100 million, and there’s this COVID-19. There were no shows for a long time,” she said, referring to the respiratory disease caused by the novel coronavirus that was first reported in Vietnam in late January.

The virus, which emerged in the Chinese city of Wuhan in December 2019, has infected nearly eight million people worldwide, killing more than 435,000, according to the Vietnamese Ministry of Health’s statistics.

Due to the pandemic, the Vietnamese government mandated a social distancing policy in April.

“I’ve only been singing again for around a week or two, so basically I’m in a deep hole,” she said in May.

“But I keep telling myself to chin up and stay in good health. I need to be at my best to work hard and pay off the money I owe.”

The power of love

A month after the surgery, Ai received an invitation to drop by her boyfriend’s house for a friendly family meal.

“My man is now in military service, but his family still cares about me. I am so happy,” she said.

They first met at a funfair where Ai was performing. Her boyfriend was working as a guard.

With their affection growing deeper, one year ago the man decided to tell his parents, but they were met with fierce opposition from his mother.

She thought a transgender woman was not the right choice for her son; however, his father believed they should support the couple.

“Fortunately, his father is more open-minded. I make my efforts every day, too. I want to show his family my true love for him,” Ai said.

With love and care from her boyfriend and his family members, Ai is empowered to keep on working hard.