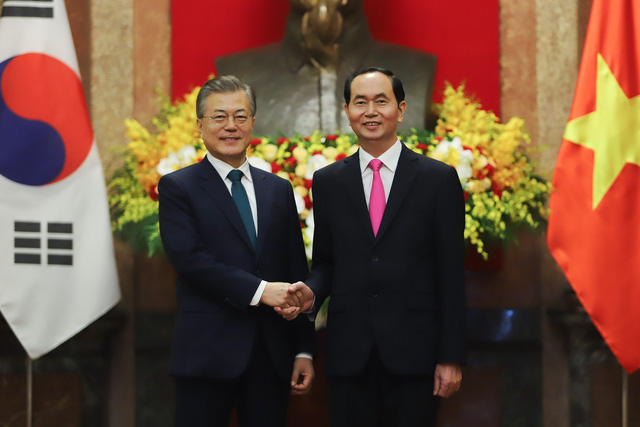 -- South Korean President Moon Jae-in said at a press conference in Hanoi on Friday that Vietnam and South Korea shared a destined fate and many historical, cultural as well as social similarities that have served to bring their people closer to one another.

-- Vietnam’s Politburo has issued a resolution paving the course for the country to become one of three leading member states of the Association of Southeast Asian Nations (ASEAN) in industrial development by the year 2030.

-- Director of the Transport Department of Can Tho City in southern Vietnam and his deputy have received disciplinary warnings for their lack of oversight that allowed seven local traffic inspectors to receive bribes of over VND4 billion (US$175,000).

-- Two Vietnamese fishermen are missing at sea after their ship capsized on Friday about five nautical miles off the coast of Bac Lieu Province in southern Vietnam due to the strong winds and violent waters.

-- The Asian Development Bank (ADB) has pledged to invest $287 million into Ho Chi Minh City to develop a nearly 100-kilometer ring road that allows traffic to circumvent the southern hub, the third of its kind to be built in the city.

-- Thousands of workers at a Taiwanese footwear factory in southern Vietnam’s Dong Nai Province went on strike on Friday to protest the company’s recent adjustments of their pay scale.

-- Speed cameras have been installed on the Phu My Bridge, which connects District 2 and District 7 in Ho Chi Minh City, to provide traffic police with photo evidence to slap fines on speeding drivers starting from April 1.

-- Two Vietnamese fishing vessels have been ambushed by Chinese ships and robbed off their fishing equipments while operating near the Hoang Sa (Paracel) Islands in the East Vietnam Sea, Vietnam Border Defense has confirmed.

-- Former chairman of state-run telecom giant Mobifone Le Nam Tra has the said the company’s 2015 secret deal in 2015 to acquire payment television service AVG at the price of $392 million was a “political mission” that had been approved by the Ministry of Information and Communications.

-- Developer of a resort in the central city of Da Nang that blocked access to a local beach has agreed to remove a part of its fences after facing backlash from residents and tourists.