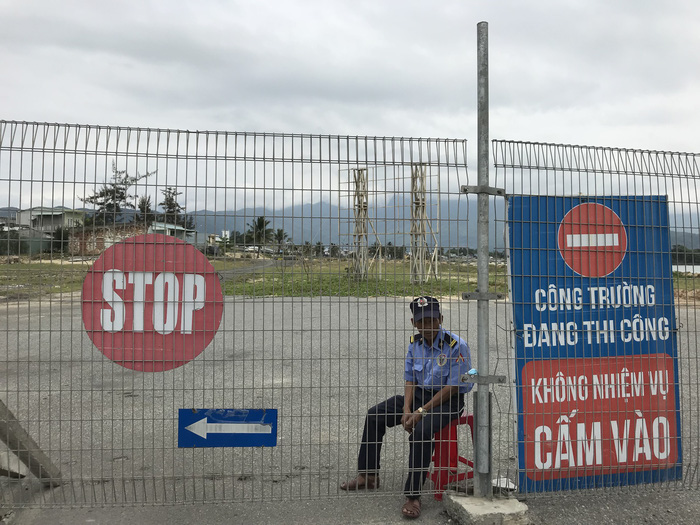 Residents of a neighborhood in Da Nang are infuriated over the construction of a resort blocking their access to a local beach.

People in the coastal Nam O Village in Hoa Hiep Nam Ward, Lien Chieu District assembled in front of the Lancaster Nam O Resort construction site on Wednesday morning to show their opposition to a fence erected by the developer blocking public access to the beach.

The two-kilometer fence along the entrance means that local residents are forced to hike quite a distance to the southern end of the fence in order to enjoy the public beach.

At the northern end of the fence, an area known for its scenic views, a security guard working for the resort developers has restricted access to only village residents.

Visitors from other neighborhoods are banned.

There were previously six openings along the fence, Truong Van Do, an official in Hoa Hiep Nam Ward, said, adding that the project developer had recently closed all but one.

Local residents are so upset that they have begun venting their frustration by damaging the fence, despite the presence of security guards and police officers.

Following the fierce reaction, the developer decided to reopen the gates.

A probe by Tuoi Tre (Youth) newspaper showed that the Lancaster Nam O Resort project, which covers an area of 30 hectares, is being developed by Trung Thuy Da Nang Company,

The fence was established in June 2017, but the construction has yet to be initiated as the firm is still asking for a building permit from competent authorities.

The Da Nang People’s Committee has already given the piece of land to the developer, Nguyen Huu Thiet, chairman of Lien Chieu District, said.

As no detailed plan has been established for the construction, Trung Thuy Da Nang Company has not determined which path will be left for local residents to get to the beach, Thiet continued.

The Lien Chieu Party Committee has asserted that the developer must not block public access to the beach.

The district’s administration has been tasked with working with the company to make sure they will refrain from blocking access in the future.

Tuoi Tre reporters tried to contact the firm on Wednesday afternoon but received no response.