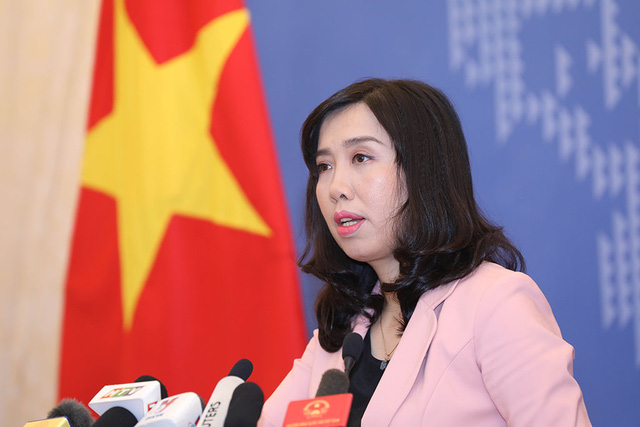 The enforcement of Vietnam’s cyber security law, which was adopted this week by its legislature, is “critically necessary” in the current context, foreign ministry spokesperson Le Thi Thu Hang told reporters on Thursday.

Hang made the remark at a regular press briefing in Hanoi in response to a reporter’s question about the recently adopted Law on Cyber Security.

Passed on Tuesday with an overwhelming majority of votes from Vietnamese lawmakers, the 43-article law regulates activities to “protect national security and ensure social order and safety in cyberspace” while stipulating the responsibility of agencies, organizations, and individuals.

Hang said the law was voted for and adopted after “many rounds of discussion” which took into account feedback from members of the country’s lawmaking National Assembly and the public in a “comprehensive and transparent” manner.

“[The law] is in conformity with the Constitution and will not hamper the implementation of the international treaties to which Vietnam is party,” she stressed.

The spokesperson noted how cyber security is an important issue that greatly affects national security and highlighted that it has become a special concern of many countries and organizations, both international and regional, in recent years.

Cyber attacks are increasing exponentially, both in form and scale, transcending national borders and leaving serious impacts on the economic and political stability of a country, she said.

“Meanwhile, efforts to improve security in the online environment are still faced with numerous challenges, particularly due to the lack of legal institutions and capability to ensure cyber security,” Hang explained.

“Therefore, the enforcement of the Law on Cyber Security is critically necessary in the current context,” she stressed.

The National Assembly passed the cyber security law with 86.86 percent in favor on Tuesday.

The piece of legislation requires all foreign providers of Internet-related services to open representative offices and data centers in Vietnam, where information of Vietnam-based users must be stored, in order to continue offering their services to local users.

An article in the law grants the country’s Ministry of Public Security the power to demand access to any organization or company’s data system for investigation in cases where there is a perceived threat to national security and public safety.

Internet service providers, including popular platforms like Facebook, Google and YouTube that are used by millions in Vietnam, will be required to remove ‘anti-state,’ ‘offensive’ or ‘inciting’ contents from their sites within 24 hours of receiving a request from the ministry, according to the law.

Over half of Vietnam’s population of 92 million have access to the Internet, according to a 2017 report by the Ministry of Information and Communications.