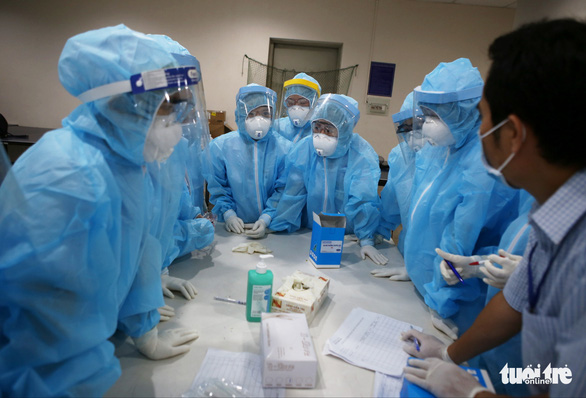 The number of local coronavirus infections in Vietnam’s epicenter Bac Giang Province has surpassed 1,000 in the ongoing fourth wave as the Ministry of Health confirmed 184 additional domestic cases nationwide on Monday.

Monday’s count is the second-biggest daily case increase to have been recorded in the past two weeks, with the sharpest jump – 187 patients – announced on May 16, according to the ministry’s data.

A whopping 105 of the latest cases were registered in Bac Giang Province, a hub of industrial parks in northern Vietnam, the ministry said in a report at 6:00 pm on Monday.

Ho Chi Minh City detected one case, a 18-month-old baby boy who had come into close contact with his grandmother, who is a noodle soup vendor and a COVID-19 patient.

The Southeast Asian country has battled the pathogen’s re-emergence since April 27, with 2,349 community transmissions having been reported in 30 out of 63 provinces and cities.

Only seven cases have been confirmed in Ho Chi Minh City in this onslaught.

The health ministry announced 73 recoveries on Monday, taking the total to 2,794.

Vietnam has detected 5,404 cumulative cases, including 3,918 domestic infections, since the virus emerged in the country on January 23, 2020, according to Ministry of Health statistics.

More than one million vaccine shots have been administered to medical staff and other frontline workers in Vietnam since its mass inoculation was rolled out on March 8.