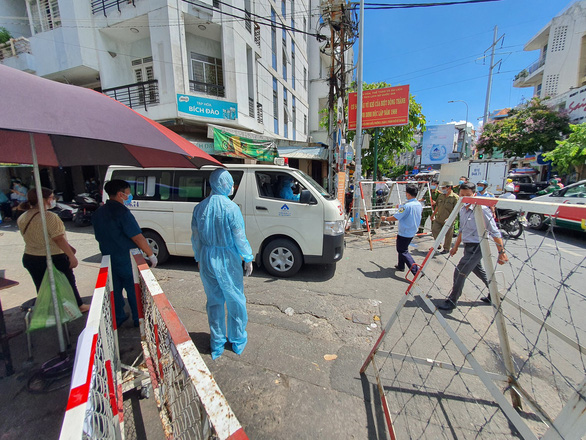 The grandchild of a noodle soup seller who was confirmed as a COVID-19 patient in Ho Chi Minh City last week is now considered a suspected case, according to the municipal Center for Disease Control (HDCD).

The baby, 18 months old, tested negative for the virus on May 20 but a retest came back positive on Sunday, the HCDC said in a report on its verified Facebook account on Monday.

The case has not been registered by the Ministry of Health so it is still regarded as a suspected infection, pending further testing.

The patient’s mother took the baby to visit the grandmother, 58-year-old D.T.T., on May 15 and 18, according to a contact tracing report.

T. sells noodle soup down the alley at 287 Nguyen Dinh Chieu Street, Ward 5, District 3, which is considered one of the central business hubs.

The alley is now locked down after the woman and two of her children were confirmed as coronavirus patients on May 20.

Their source of infection stems from Da Nang, a coronavirus hotbed, as one of the two children had visited that beach city during the holiday marking Reunification Day (April 30) and International Workers’ Day (May 1) and returned to Ho Chi Minh City on May 3, city chairman Nguyen Thanh Phong said during a meeting on Friday.

The child likely got infected with COVID-19 in Da Nang and spread the disease to the mother and the other sibling, Phong hinted at the meeting.

Contract tracing, quarantine, and testing in relation to those cases have been underway since last week, with thousands of tests having come back negative.

Vietnam has been grappling with a new wave of infections since April 27, when it recorded the first local transmission after having spent about a month detecting zero cases.

The health ministry has announced 2,221 domestically-transmitted infections since then, according to the Ministry of Health’s data.

Ho Chi Minh City has confirmed only six transmissions in this fourth wave.

Vietnam has logged 5,275 local and imported COVID-19 cases since the coronavirus first emerged in the country on January 23, 2020, according to the health ministry’s statistics.

Recoveries have hit 2,721 while 43 patients have died, including eight this year.

Vietnam has combated four bouts of infections so far, the latest being the worst.