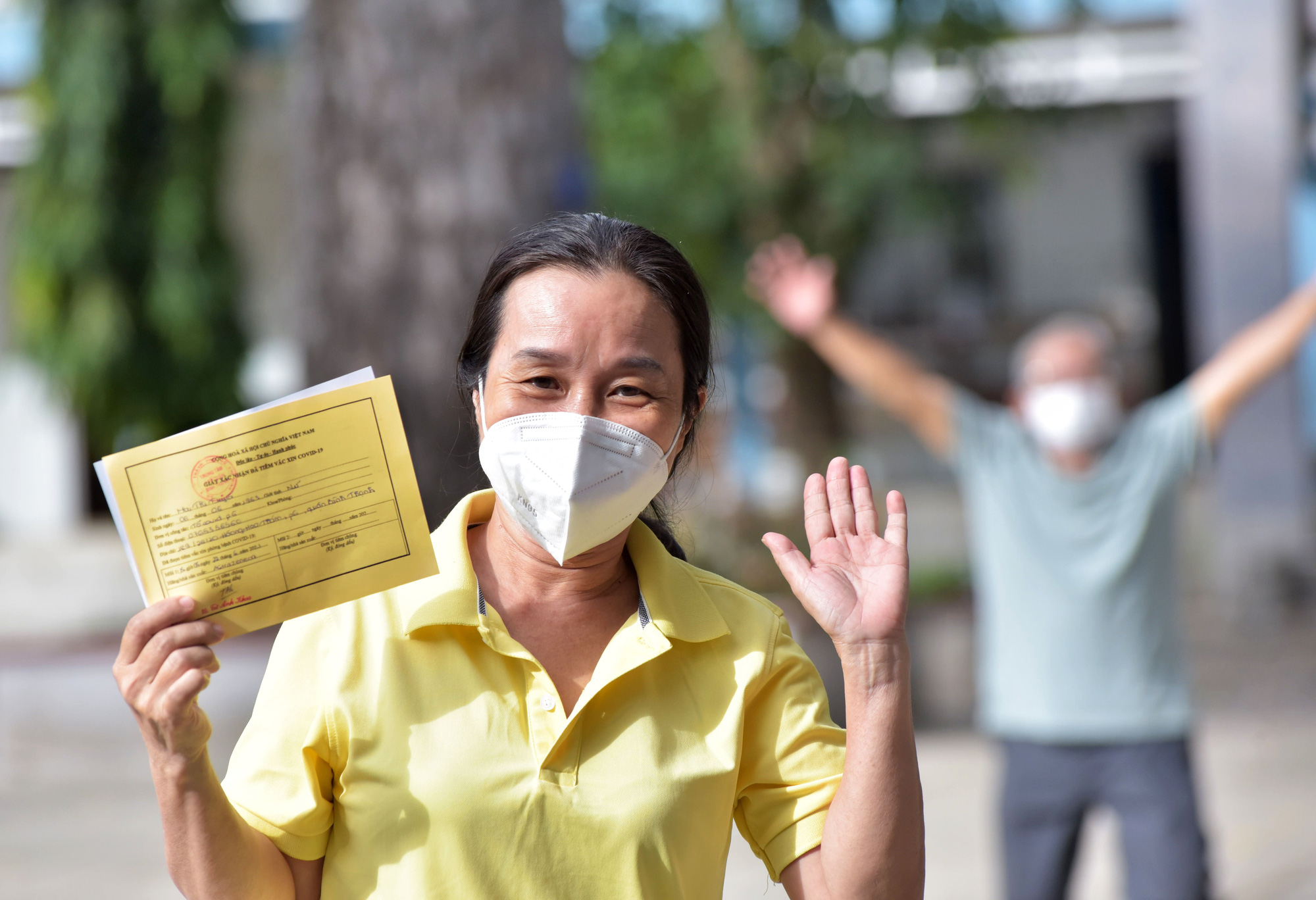 Many people living in Ho Chi Minh City have shown support for the metropolis’ largest-ever COVID-19 immunization drive by showing up at vaccination venues to get inoculated against the respiratory disease.

The drive kicked off on June 19 and is carried out at 650 injection locations every day until June 27, using 836,000 doses of AstraZeneca vaccine developed by British-Swedish firm AstraZeneca and the University of Oxford.

In addition to priority subjects designated by the government, this vaccination campaign benefits others including essential service providers, teachers, health workers, people working at administrative agencies, people over 65 years old, and workers at industrial parks and export processing zones.

Aside from some vaccine-hesitant people, many others were eager to line up and get injected against COVID-19, doing their part in slowing and hopefully ending the pandemic.

One of the first arrivals at the vaccination site at Hoang Hoa Tham High School in Binh Thanh District on Tuesday, Nguyen An Mi, a dweller in the same district, said that she went to receive the inoculation for the sake of herself, her family, and the entire society.

A healthy person, Mi felt no pain or abnormal symptoms about half an hour after the injection.

Considering vaccination as a benefit rather than a duty, Nguyen Ba Hai, 28, found time from his hectic working schedule for the shot on Tuesday.

Like Mi, Hai understood that getting vaccinated was to not only protect him against the disease but to also limit its spread to others.

Mai Linh, a 36-year-old woman living in Phu Nhuan District, expressed her happiness after she and her husband were vaccinated, for the two are working at the Ho Chi Minh City Customs Department, with exposure to many people every day.

“Honestly, I’m more worried about not being protected than the possible side effects of the vaccine,” Linh said.

“It’s dangerous not to get inoculated.

“Everyone is waiting to be vaccinated against COVID-19.

“What a relief that I received my first jab!”

Hoang Dang Bac, a 57-year-old officer from the same department as Linh, showed his appreciation for medical staff.

“I am very impressed with the hard work of the medical staff,” Bac said.

“They are very enthusiastic and work well in screening and vaccination stages.”

Bac added that he hoped all citizens will soon get vaccinated like him.

With the proactive participation of the citizens, some vaccination venues were crowded on Tuesday, but medical staff and volunteers still managed to handle the workload.

In the ongoing vaccination drive, the city has administered 50,000 doses since June 19, according to the Central Institute of Hygiene and Epidemiology.

To date, about 14 - 20 percent of vaccinated people have had a post-injection reaction – which is still a reasonable ratio as recommended the vaccine manufacturers and the World Health Organization (WHO), the ministry stated.

The Ministry of Health confirmed 80 domestic COVID-19 cases at noon on Wednesday, of which 40 were in Ho Chi Minh City, raising the national tally to 13,862, with 5,546 recoveries and 69 deaths.

Since April 27, when Vietnam began to suffer the pandemic’s fourth wave, 10,575 have been recorded nationwide.