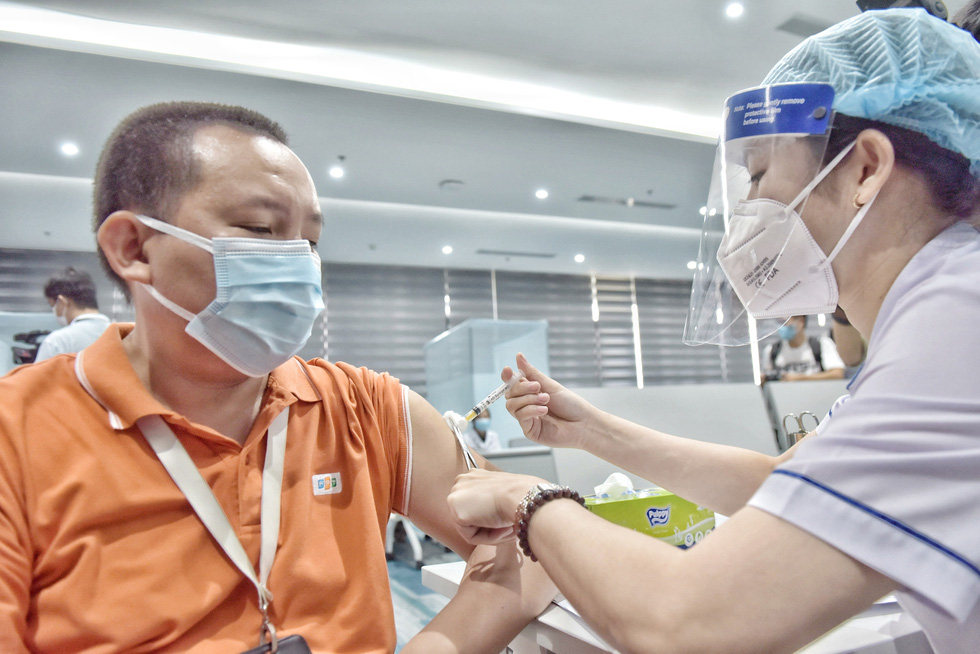 The mass coronavirus immunization drive using over 800,000 AstraZeneca vaccine doses kicked off in Ho Chi Minh City on Saturday morning, with around 500 workers of a company in the Saigon Hi-tech Park to be the first to receive inoculation.

The launching ceremony for the drive was held at FPT Software Co., Ltd., located in the park in Thu Duc City.

It was attended by Permanent Deputy Prime Minister Truong Hoa Binh, officials from some ministries and the city, and the Japanese Consul General to Ho Chi Minh City, Watanabe Nobuhiro.

The Thu Duc City Medical Center expected to complete the inoculation of about 500 workers of the company within the morning of Saturday by arranging five injection teams having five members each.

Before the injection, the workers underwent health check-ups for screening purposes and were given relevant instructions and recommendations, the center reported.

The vaccination of these workers marked the start of the city’s largest-ever mass immunization drive as well as the beginning of the country’s largest vaccination campaign in its history.

The drive will be carried out at 650 injection points every day for about seven days, using 836,000 doses of AstraZeneca vaccine jabs developed by British-Swedish firm AstraZeneca and the University of Oxford, said the municipal Heath Department.

It is expected that around 200 people will receive inoculation at each point per day, and at such a rate, the mass immunization will be completed by June 27, the department said.

The central government has allocated these doses to the city after it received nearly one million jabs donated by the Japanese government to Vietnam on Wednesday.

In addition to priority subjects designated by the government, this vaccination drive benefits others including essential service providers, teachers, health workers, people working at administrative agencies, people over 65 years old, and workers at industrial parks and export processing zones.

The target groups including workers at industrial parks and export processing zones, residents in Go Vap District and two wards of District 12, people aged over 65, the poor, and social policy beneficiaries.

Since March 8, when the city began vaccination for local residents, nearly 44,000 people have received their first shots and 50,718 people have finished the two-dose regimen, local health authorities reported.

The Ministry of Heath confirmed 112 new coronavirus cases on Saturday morning, including 109 domestic and three imported cases, of which 64 were reported in Ho Chi Minh City.

Since April 27, when the pandemic’s fourth wave appeared in Vietnam, the country has documented 9,375 cases, of which 1,938 have recovered.