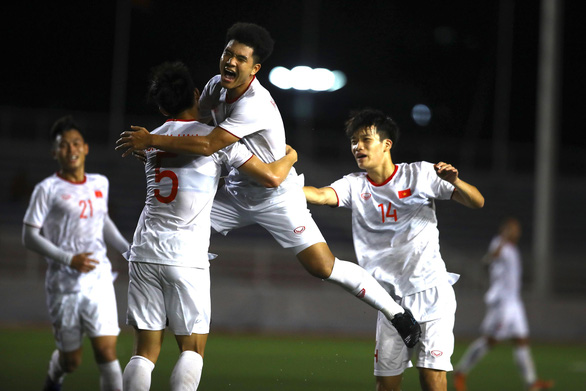 Vietnam have kept their perfect record in men’s football at the 2019 Southeast Asian (SEA) Games, narrowly beating Singapore in their fourth group-stage game on Tuesday.

But the junior Golden Dragons exerted a lot of effort before they could find the net of the young Lions, who played both bravely and tactically, toward the end of the game at Rizal Memorial Stadium in Manila, the Philippines.

Fandi Ahmad Irfan challenged goalkeeper Nguyen Van Toan with a free kick from the left flank 16 minutes into the game.

Park had to let playmaker Nguyen Quang Hai out six minutes later as he suffered an injury following a race against a Singaporean defender. Do Hung Dung was fielded to shoulder the midfield for Vietnam.

Nothing much happened in the first half as Vietnam had no shot on target while Singapore had one after three attempts.

Park substituted midfielder Tran Thanh Son with striker Nguyen Tien Linh after the break to provide support for forward Ha Duc Chinh, who had found it hard to break through the opponents’ defense.

Chinh raced past two Singaporean defenders in the 61st minute, passing the ball to Linh, whose finish hit another defender to go wide.

Left-back Doan Van Hau almost scored in the 78th minute but his header from a corner kick just missed the target.

Linh could not make it again on 81 minutes, heading over the bar from a Do Hung Dung cross.

But the junior Golden Dragons eventually netted in the 85th minute. Ha Duc Chinh headed home after Doan Van Hau headed the ball to him from a corner kick by Trieu Viet Hung on the right.

This is the second time the Vietnamese have scored a late winning goal at the 30th SEA Games.

They had defeated Indonesia with the winner netted in the 90+1st on Sunday.

Vietnam are now the leaders of Group B with all 12 points after four games, followed by Indonesia and Thailand both on nine, Laos on four, Singapore on one, and Brunei on zero points.

The young Golden Dragons will take on defending champions Thailand on Thursday, whereas Indonesia will clash with Laos the same day.

The top two teams will advance to the semifinals, with Vietnam and Indonesia at an advantage.

Team Vietnam places second in the medal table of the ongoing SEA Games, hosted by the Philippines, with 23 gold medals, 27 silvers, and 25 bronzes at the time of writing.

The team sets a target of winning at least 60 gold medals and ranking in the top three in the end.