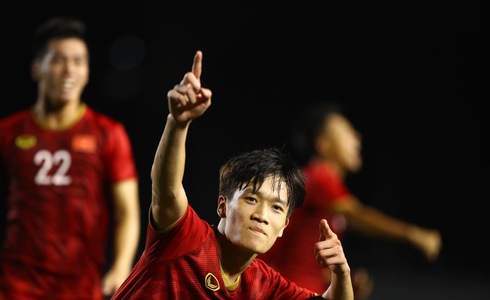 An iron-willed Vietnamese side refused to back down, despite their keeper’s slip in the first half, to stage a remarkable 2-1 comeback against Indonesia U22s in men’s football on Sunday night at the 2019 Southeast Asian Games in the Philippines.

The young Indonesians played defensively from the start of the showdown at Rizal Memorial Stadium in Manila.

The junior Golden Dragons thus found it hard to approach the woodwork guarded by Arga Nadeo.

Things turned worse for Vietnam U22s when they were trying their utmost to find the Indonesian net in the 23rd minute, when goalie Bui Tien Dung strived to grab a cross from the right flank only to let it slip onto the bar.

Sani Fauzi quickly headed home on the rebound, startling both the Vietnamese team and their supporters.

The Vietnamese almost equalized one minute later, as Nguyen Trong Hoang headed the ball to Do Hung Dung in the box but the latter fired just narrowly wide.

Hoang challenged Arga Nadeo again in the 37th minute with a shot from about 20 meters and the goalkeeper managed to tip the ball out.

A breakthrough came from a set piece a few minutes after the hour-mark.

A Do Hung Dung corner-kick found Nguyen Thanh Chung in the box and Chung equalized with a swift reverse header 64 minutes into the match.

Vietnam nearly played on the Indonesian field in the remaining time, while their opponents seemed to be fighting for one point.

The Indonesian defenders always tried to clear the ball, facing relentless attacks from the Vietnamese side.

The game was going into the three minutes of injury time when Park’s men found three points.

Nguyen Hoang Duc fired home from outside the box in the 90+1st minute following a fight for a high ball between Nguyen Quang Hai and an Indonesian player.

Vietnam U22s are on top of Group B with nine points, three clear of defending champions Thailand and Indonesia.

Laos come in fourth with four points, followed by Singapore on one and Brunei on zero points.

The top two teams will make it to the semifinals.