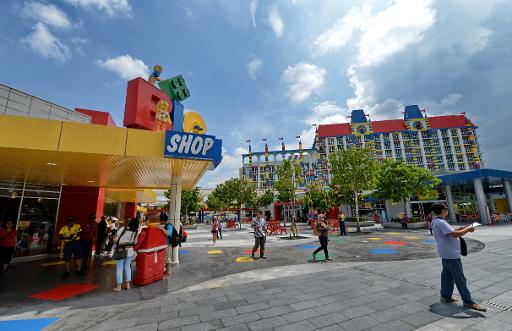 Hopes for a shared boom rise on Malaysia-Singapore border

NUSAJAYA – Rising from a former palm plantation, the towering Astaka complex will cast its shadow across the Malaysia-Singapore border by 2017, a symbol for an ambitious development zone linking the economies of the two former rivals.

Construction cranes are sprouting across southern Malaysia's Johor state as investment flows into "Iskandar", a development zone that aims to draw Singaporean capital to its larger neighbour's cheaper land and labour costs.

The zone has been dogged by skepticism since its inception in 2006, due in part to Johor's reputation in Singapore as a backward hotbed of car thieves.

But soaring costs in Singapore are causing a re-think.

Anthony Phillips moved his family across the narrow Johor Straits to Iskandar, lured by property prices that are less than half those of Singapore and cheaper schooling.

He now commutes to his Singapore communications consultancy, a trip that takes less than an hour.

"Last year's move to Iskandar has been a great success all round. Iskandar offers the best of both worlds," he said.

Authorities say Iskandar – named after a revered former Johor sultan – landed $40.5 billion in investment commitments by end-October, one-third of the way toward an ambitious 2025 target of $123 billion.

Singaporeans are already a key market for a $280 million Legoland theme park that opened in 2012 and brand-outlet shopping.

Other projects include a branch of UK-based movie makers Pinewood Studios and an "Edu-city" bringing together several European universities on one campus.

A Singaporean-funded $1.1 billion Motorsports City being built will include racing circuits, a driving school, and is intended as a regional hub for development of the sport.

Bilateral relations have long been prickly.

But Ismail Ibrahim, head of Malaysia's Iskandar Regional Development Authority, notes a "reversal of tide," saying Iskandar allows each to leverage its strengths amid an uncertain world economy.

"We like to describe our relationship with Singapore through this simple term: 'co-opetition,'" said Ismail, standing beside scale models of the Iskandar area.

"We compete, but at the same time we cooperate."

A 120-square metre condominium in the centre of Singapore fetches well over $2 million while the Johor Bahru equivalent rarely tops $400,000.

Malaysia, meanwhile, views Iskandar as a new inlet for the foreign investment that has been vital to its development.

Concerns are rising, however, that Malaysian, Singaporean, and Chinese money is fueling a speculative property bubble while more balanced economic development lags.

Johor housing prices have jumped more than 20 percent in the past year, double the national average and causing some local grumbling, yet Iskandar has one of Malaysia's lowest retail and office occupancy rates.

Units in places like Astaka, which at 301 metres (987 feet) will be the tallest residential block in either country, can go for upwards of $2.5 million.

Country Garden, one of China's top property firms and among a handful of cash-flush Chinese developers in Iskandar, has broken ground on a $5.6 billion residential township.

Of the project's 9,000 luxury condominiums, one-quarter were sold to China buyers.

Malaysian officials express hope that "catalytic" projects like Legoland and the motorsports facility will stimulate other business growth.

"There was a property play in the beginning, now we have to focus on job creation... to migrate to a vibrant economic zone," said Wan Abdullah Wan Ibrahim, chief executive of Malaysian government-owned UEM Sunrise, a key Iskandar developer.

But few other major corporate names have taken the plunge, causing some concern.

Johor business leaders complain the area's Malaysian labour base is short on skills and that many still prefer better-paying work in Singapore.

A speculated linking of Singapore's mass-transit system with Iskandar has been cited as a potential shot in the arm, but no firm plans have yet emerged.

Observers believe, however, that economic fundamentals will ensure the area's makeover is eventually completed.

"Iskandar will succeed because it has to," said Johor ruling-party parliament member Nur Jazlan Mohamed.

"Malaysia needs it economically and Singapore needs it politically to release the cost pressure."