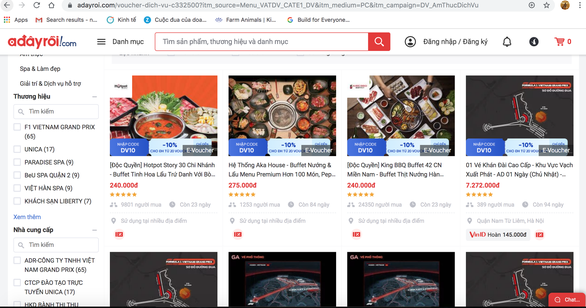 Many suppliers on Tuesday received a notice from VinCommerce, the retail arm of Vietnam’s largest private firm Vingroup, about the shutdown of the ecommerce site Adayroi.com.

VinCommerce, which operates Adayroi.com, said that the platform would shut down from 6:00 pm on Tuesday, according to documents shared by some suppliers on social media.

This shutdown is meant to assess and restructure the site’s operations in order to better meet market and customer needs in a new development phase, the retail arm explained.

This means all products, goods, and services provided on Adayroi.com in accordance with previously signed agreements will cease to be traded.

But all purchase orders placed before the closure will be fulfilled and subject to the same old sales policy, the documents said.

All payment obligations in agreements with suppliers will end by January 15, 2020, VinCommerce noted.

Such agreements with suppliers will be automatically terminated after the date, without any dispute or complaint.

The shutdown of Adayroi.com is just temporary, in preparation for a merger, suppliers said.