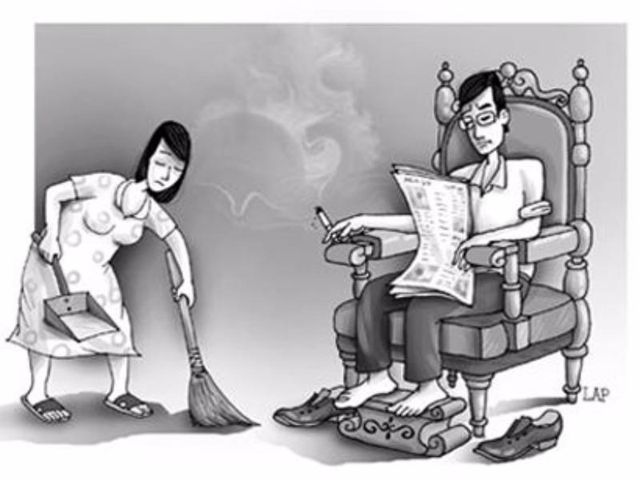 As communities around the globe begin focusing their much-needed attention on the gender inequality issues facing modern society, many in Vietnam feel the country’s efforts to put women on par with men lag far behind those made by developed countries.

Male expats living in Vietnam have shared with Tuoi Tre News their observations on how Vietnamese women are treated by society.

As a foreigner in Vietnam, I often witness men judging Vietnamese women on their beauty, appearance, and attitude, especially in the streets.

This daily ‘harassment’ can be aggressive and violent, and is typically sexually oriented. There are often long stares at women’s private parts, trying to get their attention in rude ways, and even following young women.

This happens frequently and I’ve noticed that the response from women to such a behavior is very different in Vietnam compared to Western countries.

Often Vietnamese women don’t even respond to such harassment. They usually just look down at the pavement and walk away, maybe because they are worried that if they raise their voice they will be met with physical violence.

In my work as a sociology and culture researcher, I am collaborating on a project led by Ms. Doan Thi Ngoc from Hoa Sen University labeled: Sexual Harassment in Vietnam and Understanding Gender and Gender Equality.

For a long time, women’s education was based on four specific virtues: Công (Hardworking), Dung (Beauty), Ngôn (Articulation), and Hạnh (Good Behavior). Accordingly, the ‘ideal woman’ should have all of these traits.

The result of this ideology has led to the submission of women to men and the judgment of parents’ towards their daughters.

Countless young women who we’ve surveyed have shared that the pressure and criticism they face from their parents is heavily painful, especially as it relates to their beauty, virginity, and how their abilities stack up to their peers. In the end, it destroys their self-confidence and self-respect.

Many also share the differences between their education and treatment compared to their brothers'.

Education is the key to changing this mindset. Families and schools may need to update the way men are taught to interact with women as new standards become the norm.

This process is already taking place, but there is still a long way to go in the workplace, in families, particularly in terms of bridging socioeconomic gaps.

What everyone can do is focus on their basic behaviors and attitudes: refraining from sexual jokes, inappropriate staring, unwanted touching, and showing respect.

Beauty standards also must not be discussed because they can often limit the way people try to represent themselves or can be the cause of unrealistic standards.

Some feminist movements argue that ‘opening the door’ for women, inviting women in a courteous way and other signs of basic ‘gallantry’ are a form of domination.

I would say that these acts are okay for those who, as individuals, want to show respect to women. And they offer an opportunity for men to learn how to gently accept a ‘no’.

I have seen several heated exchanges in the streets of Hanoi where men were mostly catcalling women, but in those instances I observed that Vietnamese women were quite strong in arguing their case.

The married men I know in Vietnam are very respectful of their wives.

However, there is one particular problem for younger people: social media.

The habit, particularly for girls, of making themselves look beautiful and posing for their selfies to post on social media is much more noticeable in Vietnam, and Asia in general, and suggests that there is a high degree of pressure to conform to a certain idea of appearance.

This pressure in Asian countries is a lot higher than in the Western world and I believe that comes from the way people treat and comment on each other’s appearance. Society seems to dictate that women have to be good-looking.

It takes a long time to change attitudes in any society but the pace of development in Vietnam is extraordinary to watch and I expect social attitudes to also change quickly.

It will be young people who set future standards and therefore I am optimistic that women and girls will be better respected in the future.

I hope that girls develop the confidence to confront bad behaviors from boys at an early age in order to change the general perception of what is appropriate and what is not.

These problems, however, are still less noticeable than in countries with political or religious doctrines that seek to suppress the freedom of women.

(Paul Sansome from the UK)

Women’s workload is too much

I've lived in Vietnam for over three years and what I have seen and know is that Vietnam’s culture is set up in such a way that women are expected to do all the housework, like cooking and cleaning, while men can do as they please.

This mindset runs deep in Vietnamese culture. The wife is expected take care of her husband, the kids, and the house, all while holding down a 9-5 job.

This can be traced back a few hundred years to when men would go to work and the wife would stay at home, take care of the kids and look after the house. But nowadays it’s different. Both parents have to work to provide for their family, and when a woman comes home, she still has to cook and clean, which is definitely unfair.

To solve this problem, men and women should talk to one another more often so that men can see how hard it is to be a woman in Vietnam. We have a saying in the West: “Don't judge a man until you've walked a mile in his shoes.”

I think respect comes from the heart. If you truly love your woman, there’s nothing you wouldn’t do for her. My Vietnamese girlfriend is amazing and works her socks off at home and at work. I try to show my appreciation by my actions. When I have time I try to help her with the washing or cleaning. It's the small things that make a difference.

In regard to women, I treat them with the same respect as I do with men. For me, there’s no difference.

(Wayne Jordan from the UK)

I believe that commenting on a woman’s appearance originates from the belief that “women represent beauty."

With this way of thinking, men allow themselves to comment on and judge unpleasant appearances without guilt.

I think this hurts women, even if they do not hear the comment. After all, we don’t get to choose the way we look when we’re born.

Women should be straightforward

I lived in Vietnam from 2003 to 2010 and noticed that women in Vietnam, and Asia in general, have a tendency to have more respect for men than for women.

Women in Vietnam do not demand equality and are often not straightforward about what they want.

Women have the right to say what they want while also demanding faithfulness and sharing household responsibilities. They are able to demand respect, love, and a healthy life.