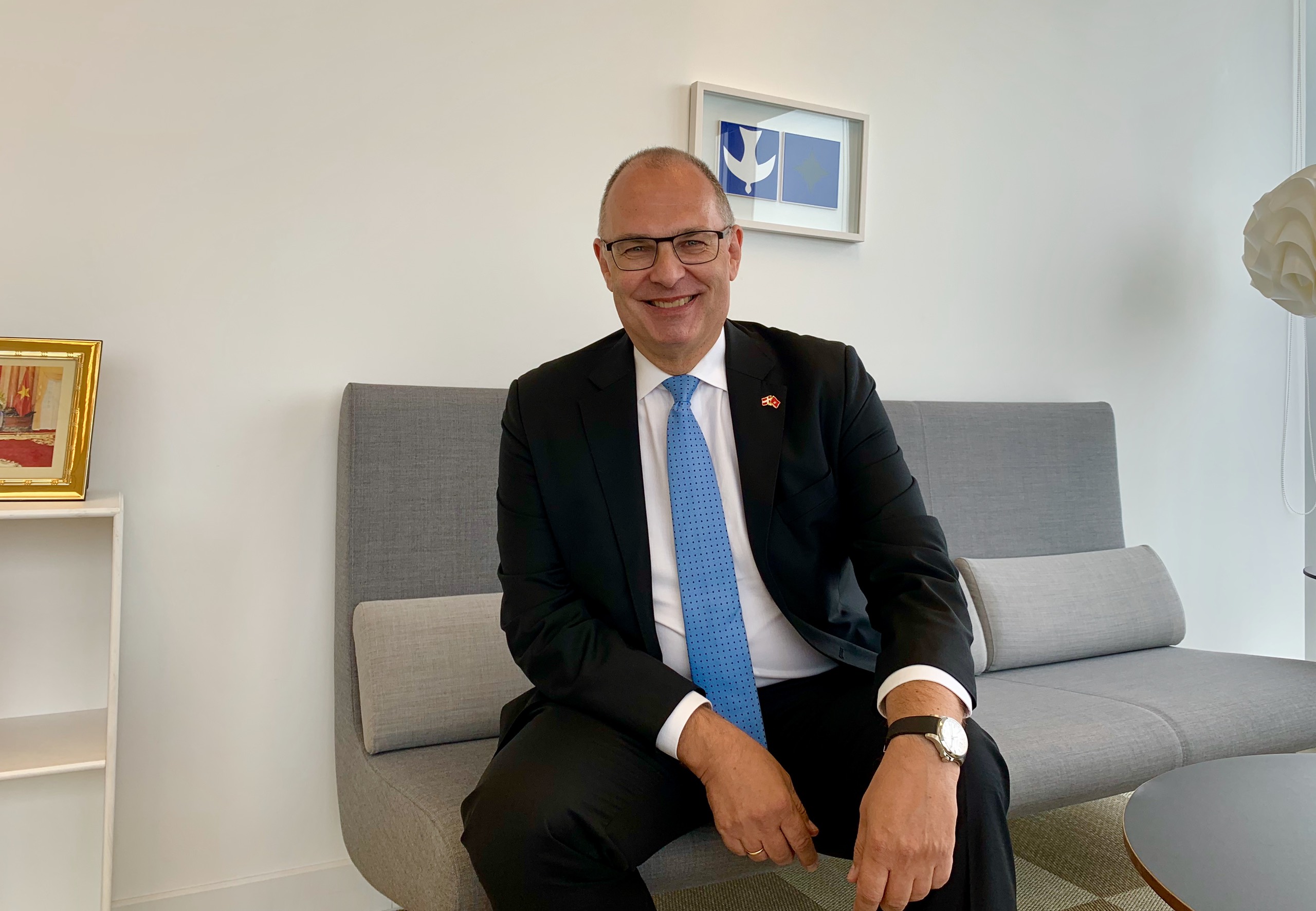 LEGO has decided to build its first-ever carbon-neutral plant in Binh Duong Province, just outside Ho Chi Minh City, which is considered a ‘green cornerstone’ in foreign investment flow into Vietnam.

The Danish group will pour over US$1 billion into building the plant at a 44-hectare site in Binh Duong, which will create up to 4,000 jobs over the next 15 years, the company said in a statement issued in December 2021 on its website.

Construction of the carbon-neutral factory, LEGO Group’s sixth manufacturing site and second in Asia, will begin in the second half of 2022 and production is due to start during 2024.

LEGO has recently decided to build a plant in Binh Duong. Could you please share some more general information on this carbon-neutral plant?

As you know, LEGO Group is a world-leading company specializing in manufacturing safe and educational toys that help children develop intelligence and creativity in educational and life settings. LEGO’s decision to build its new factory in Binh Duong is very good news for and a contribution to Vietnam’s foreign direct investment (FDI) and economic growth. The project is the single largest investment for LEGO ever and was also the largest foreign investment in Vietnam in 2021.

The project was confirmed last December with the signing of a memorandum of understanding between LEGO and Vietnam-Singapore Industrial Park Joint Venture Company Limited (VSIP) in Binh Duong. A new LEGO factory in Vietnam is an important part of the group’s strategy to expand its business in the Asia-Pacific region.

For this new factory, LEGO plans to invest more than $1 billion over 15 years in machinery and facilities and expects to employ up to 4,000 employees of mid to high skill levels by 2040. This factory will contribute to Vietnam’s export volumes as the majority of products manufactured will be exported to the Asia-Pacific region.

One of the special features about the new LEGO plant in Vietnam is that it will be carbon-neutral and be built in compliance with the LEED (Leadership in Energy and Environmental Design) Gold Standard. In addition, LEGO has also been exploring the feasibility of investing in a 40 MW solar power plant, which will provide 100 percent renewable power for the operation of the new factory.

This is LEGO’s second plant in Asia. In your opinion, what is the main reason for the firm to choose to build the plant in Vietnam, not other countries in the region, e.g. China or Indonesia?

This is a very important and strategic investment decision and part of LEGO’s expansion strategy in the Asia-Pacific region. And as you just mentioned, in the beginning, LEGO looked at several potential countries including India, Indonesia, China, Vietnam, and more to define a right location for their new factory in the region. During this thorough evaluation process, which involved quite a number of analyses of various locations, sites, labor force, supply of materials, infrastructure, not least intellectual property right, Vietnam emerged as a strong and trustworthy candidate.

It is also worth noting that since the early days of its preparation two years ago, the project has received strong political support from the government of Vietnam at all levels. In my opinion, this is one of the decisive factors for LEGO to choose Vietnam as the destination for the new factory.

With support from our embassy, a number of meetings with Vietnam’s high-ranking stakeholders and central ministries were successfully carried out, including those with the Deputy Prime Minister Pham Binh Minh and between LEGO’s CEO and Vietnam’s Prime Minister Pham Minh Chinh. These also include the government’s commitment to support and facilitate LEGO’s plan to build their own solar power plant for consumption of the new factory and thereby fulfil their ambition to make this new factory carbon-neutral.

Recently, Vietnam has been mentioned in connection with its ambitious commitment to net-zero carbon emissions by 2050. What is your assessment of this commitment and will this become a positive point for attracting FDI?

Vietnam’s commitment to 2050 net-zero emission target sent an important and strong signal regarding the country’s direction toward low-carbon and green development. This can be a new driving force for Vietnam’s sustainable socio-economic development, helping to improve its competitiveness and exports. With such a commitment, Vietnam also joins the growing global coalition of ambitious nations with over 130+ countries pledging net-zero targets in their long-term strategies, and reaffirms Vietnam’s commitment to the worldwide efforts to reduce global warming and combat climate change.

Business- and investment-wise, carbon border taxes are likely to become a feature of global trade and attracting FDI will also depend increasingly on the availability of low-carbon production systems. Increased renewable energy will attract more FDI to Vietnam as international companies place more emphasis on green supply chains and products to meet consumers’ demands and to meet their own global commitment to reducing their carbon footprints. Therefore, going green is indeed good business for Vietnam.

Vietnam has received many visits from individuals and organizations involved in climate change, like COP26 Chairman Alok Sharma and U.S. Special Presidential Envoy for Climate John Kerry. Is Vietnam an attractive destination? Does Vietnam have any advantage when green economies have become more and more popular? What Vietnam should do to attract more carbon-neutral plants?

Vietnam has become an attractive destination for international partners and investors partly thanks to the government’s strong commitment to reducing carbon emissions and actively responding to climate change.

Vietnam has large potential for renewable energy development, particularly offshore wind. This could contribute significantly to decarbonization of the power sector given that right policies and an enabling environment are created.

The Vietnamese government has already been doing a lot to attract foreign investments. However, there is a lack of access to renewable energy. For many Danish companies who are in contact with us at the Danish Embassy, it is a requirement and condition for their investments that renewable energy is available to cover 100 percent of the electricity used.

The government of Vietnam has emphasized the role of renewable energy in ensuring a sustainable energy sector. However, what I hear from many foreign investors is that the process for obtaining permits for renewable energy projects is cumbersome, time-consuming and involves several government agencies, which consequently increases investment costs. This eventually leads to foreign investors hesitating to make investment decisions.

If Vietnam wants to further promote carbon-neutral investments, the government should remove the mentioned barriers.

Could you please share with us some experience and challenges that Denmark has met during your transition to a green economy, including your moving to carbon-neutral plants? What could Vietnam learn from Denmark during this transition in our country?

The Danish experience shows a clear value of having a long-term vision. Our government has established a solid legal framework and further agreed on very ambitious energy and climate targets for 2030. This creates certainty, consistency, and a stable environment for mobilizing resources from the private sector. The consistent and far-sighted Danish political objectives have formed the foundation for close public-private cooperation and created the stable environment required for making long-term investments.

Let me also emphasize that we find it of utmost importance to closely link the ambitious energy and climate targets with policies for economic growth, energy security, and environmental protection.

Vietnam is an important partner for Denmark when it comes to green economy transition, and our collaboration will continue and be further strengthened in the time to come. Denmark is happy to share with Vietnam solid and well-proven Danish solutions, knowhow, and best practices to support Vietnam in realizing its great potential for green transformation and the country’s commitment to combat climate change.

I have no doubt that Vietnam is attracting the attention of Danish investors. We are currently assisting a number of Danish companies in various sectors who are eyeing Vietnam as a potential location for investment. It is worthy to note that all these projects place a very strong focus on green operation and net-zero targets.

For examples, we have Copenhagen Infrastructure Partners (CIP) who is going to invest in the 3.5 GW La Gan offshore wind power project with the expected investment of up to $10.5 billion in Binh Thuan Province. This project is expected to power more than seven million households per year and help Vietnam avoid the use of 130 million tons of CO2 emissions over its lifetime.

Ørsted is another strong Danish player who is responsible for over 25 percent of all installed and under-construction offshore wind in the world today. Last year, Ørsted and Vietnam’s T&T Group signed a memorandum of understanding on strategic collaboration on offshore wind in Vietnam, witnessed by Chairman of the National Assembly Mr. Vuong Dinh Hue in Belgium. The consortium is bringing a multi-GW pipeline of greenfield offshore wind projects located in many provinces in Vietnam.

I can see a lot of potential for Vietnam to become a more strategic player in the global economy. There are other, specific Danish investors looking for opportunities to strengthen their value chains in developing markets like Vietnam. Beside the traditional areas like the manufacturing of textiles, furniture, food, and agriculture, we have reasons to believe that companies in other sectors such as technology, green energy, medical devices, maritime spheres, to name a few will also consider Vietnam as a possible destination.