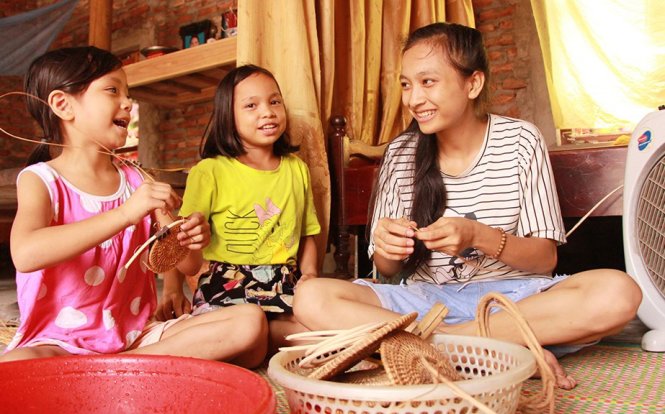 A motherless student in Hanoi sees graduating from college is the best way to help her father remove their poor family’s heavy debt.

Tong Thi Dinh, 18, decided to advance her education after receiving news that she was admitted to learn Chinese linguistics and literature at Hanoi Open University.

The chief motivation was to serve as a breadwinner like her father in the future to clear a debt that she estimated to exceed VND100 million (US$4,300).

Dinh has lived with her father and two school-age sisters in a leaking-roof house that has two beds and a memorial table with a photo of her late mother.

The woman’s death in 2016 came as a great shock to Dinh, who was a high-school girl at the time and has since tended the younger siblings and done household tasks in place of the deceased mother while the father is away from home for work.

“Initially I thought I couldn’t juggle everything related to the new role. But I encouraged myself to move on a little bit and I’ve so far overcome all difficulties,” Dinh said.

Dinh and her father used to arrive at many houses on an old motorcycle at night and knock on their doors in order to borrow money for the mother’s medical treatment.

She felt worried whenever hearing the engine sound of a motorcycle parking in front of her house, as it could be a debt collector’s visit.

She and her sisters made handicrafts in their spare time – a job that earned them a monthly amount of money enough to buy low-cost food supplies and accessories like shoes.

She is bent on getting college education, thinking that she can simply obtain a modest sum and will inadvertently set a bad example to the sisters if she gives up learning and is employed as an unskilled worker.

Her father agreed, saying “only with education can her future be bright.”

But he was filled with mixed emotions at the daughter’s determination, as the family will shoulder her tuition burden along with the outstanding debt.

“I’ll find a job upon graduation. I’ll help you pay the debt then,” Dinh told her dad.

At the table where she used to study at home, she placed her mother’s picture and small notes that read “Try more,” “Don’t fall down,” and “As you’ve already spent some time thinking, why didn't you think bigger?”