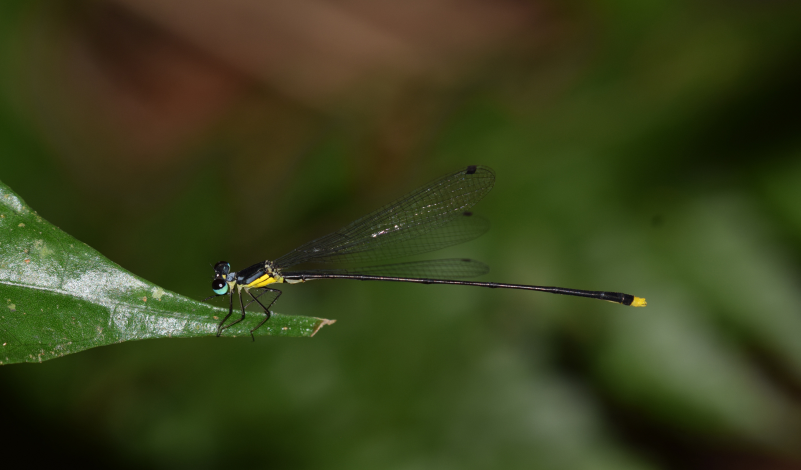 A new species of damselfly, an insect closely related to the dragonfly, has been discovered by a researcher from Da Nang’s Duy Tan University studying biodiversity in the Central Highlands province of Kon Tum.

Damselflies and dragonflies are indicative of the water quality and general health of an ecosystem.  They also help protect crops from pests.

Dr. Phan Quoc Toan first wrote publically about the newly discovered species in an article published in the international journal of Zootaxa in early February, where he announced it would be named Coeliccia lecongcoi in honor of the scientific contributions made by Le Cong Co, the first president of Duy Tan University in the central city of Da Nang.

According to Toan, the duty of naming a new species falls upon the person who discovered it, but the label must not include that person’s own name.

This is Toan’s second major discovery in the past two years, following his identification of the Coeliccia duytan damselfly species at Chu Mom Ray National Park in Kon Tum in 2017.

Toan’s office at Duy Tan University looks more like a natural history museum than an office, with damselflies and dragonflies covering the walls – a precursor to the biological museum he hopes to build one day in central Vietnam.

“When I started doing my PhD thesis on dragonflies in Japan in 2013, my instructors told me to ‘mine for gold’ when I returned to Vietnam,” he recalled.

And that he did.

“I knew exactly what they meant.  I finished my degree at the Tokyo Metropolitan University in 2016 and immediately came back to Vietnam when I did, in fact, strike gold.”

Those ‘gold mines,’ he says, are the lush world of insects and parasites that make up Vietnam’s characteristically diverse ecosystem.

“Japan is so far ahead scientifically that there’s even an association of nearly 100 scientists studying the characteristics and habits of the damselfly alone,” he said.

“That’s why more there are more chances of being the one to discover a new species in a developing country.”

Over the past two years, Toan and his colleagues have found 19 new species of damselfly in Vietnam’s forests, nature reserves, and national parks.

His current aim is continue researching biodiversity in Vietnam and hopes to use his expertise to focus on conserving insects, studying their origins, and observing their reactions to climate and ecological change.

He is currently considered one of the most knowledgeable damselfly researchers in Southeast Asia, according to To Van Quang, a researcher at Vietnam’s Southern Institute of Ecology.

Toan’s works are expected to provide scientists with more information for research in the evolution, taxonomy, and genetic features of damselflies, Quang added.