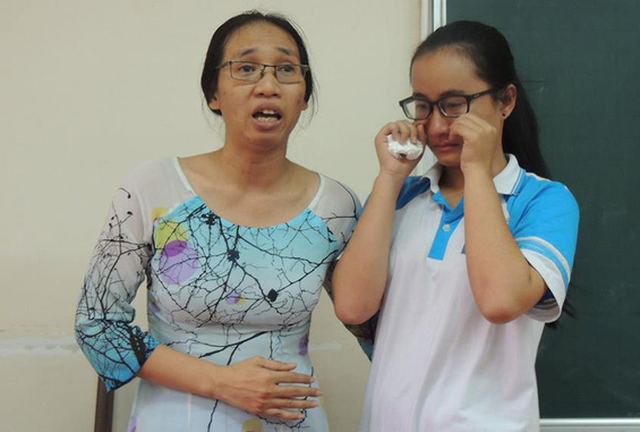 A high school teacher in Ho Chi Minh City who got suspended last year for giving her students “the silent treatment” has been suspended again merely two months after resuming her job, this time for throwing students’ notebooks to the ground in a fury.

Tran Thi Minh Chau, who teaches math at Long Thoi High School in Nha Be District, was in April 2018 admonished and suspended from teaching after she had refused to utter a word in class for three months straight.

Between January and April last year, Chau would spend all her time in one specific class, 11A1, writing lessons on the board without speaking a word to her students.

The teacher’s unusual silence made headlines when one of her 11A1 students, Pham Song Toan, burst into tears at a meeting with city officials as she recounted the dreary atmosphere during the lessons taught by the female teacher.

The school later convened another meeting and decided to suspend her from teaching and assign her non-teaching duties until the end of 2018 as disciplinary actions.

In January 2019, she was given a second chance to teach and was assigned her first class in eight months, according to Long Thoi High School headmaster Bui Minh Binh.

However, the teacher managed to get herself suspended for a second time in March, only two months after returning from her first suspension, Minh said.

While Chau no longer turned on her ‘silent mode’ teaching this class, she got in hot water for throwing her students’ notebooks to the ground in a fit of rage when the students failed to finish their homework or did not follow her instructions in doing it, the headmaster added.

The principal did not elaborate on whether it is a single or repeated incident.

A number of parents also made complaints to the school that Chau frequently showed up in class in a bad mood and terrorized students with her incessant scolding.

Chau has been suspended for an indefinite period until a further decision is made on her case, Minh said.