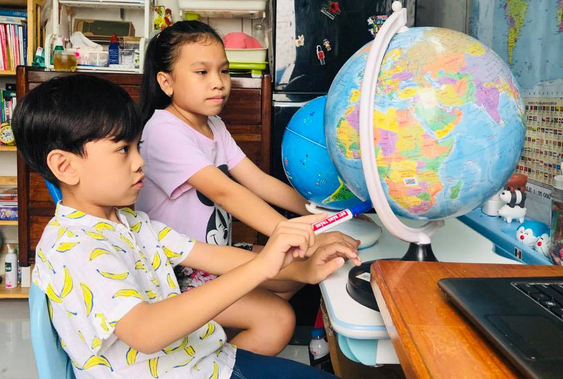 Thai Huynh Chi Kien, a seven-year-old living in Go Vap District of Ho Chi Minh City, was hailed by the Vietnam Record Association for his ability to recite the capital city, draw the official flag, and identify the national anthem of nearly 200 countries in the world.

Thai Le Vu Hoan, Kien’s father, said that his son was first exposed to images of flags from foreign countries while watching football matches on TV a few years ago.

“In August 2019, we were really surprised by Kien’s ability when he repeatedly challenged us to recite the names of countries based on their flags, as well as their locations on the globe and the names of their capital cities,” Hoan recalled.

According to Hoan, Kien started exhibiting a notable sensitivity to words and images since his kindergarten days. He also acquired a good command of reading, which allowed him to indulge in world geography books at a very young age.

Kien’s reading ability also gave him a leg-up in doing research on national flags via television and the Internet. Under his sister’s instruction, Kien was able to use an iPad and the computer to access the vast library of information online.

Taking note of their son’s deep interest in geography, his parents often bring him to the bookstore to get him books on the subject.

Reading is not Kien’s only passion; he also loves painting and drawing.

“He paints the images that pop up in his mind, such as different nations' territories and their flags. I suppose the drawings helped him memorize better,” Hoan said of his son’s interests.

Globe models and world maps are also the gifts of choice by Kien when his parents reward him for his school study performance.

“Kien loves globe models; he considers them his friends. He spends the majority of his time during the day examining the globe, even cuddling one globe model to sleep at night,” Huynh Hanh Thu, Kien’s mother, said.

After mastering all of the flags, national emblems, capital cities, and locations of the countries in the world, Kien decided to brush up on his knowledge of national anthems.

“Chi Kien listened to national anthems of the world via Wikipedia. So far, he is able to memorize and recognize the anthems of some 190 countries and territories from all over the globe,” Hoan said.

“Not only does he remember the melody, he can also tell the older and latest versions of a country’s national anthem apart."

Since the Wikipedia audio pieces do not include the lyrics, Kien had to take it upon himself to find the full versions as he gradually learned to sing the national anthems of countries in their original languages.

Kien has a special interest in national anthems because learning them has provided him with valuable lessons on each country’s history.

On February 20, he was invited to the headquarters of the Vietnam Record Association in Ho Chi Minh City for a memory quiz, where his ability to identify nations, anthems, and flags of multiple countries took all the judges by surprise.

After the test, Kien was enlisted as a contender for the Vietnamese record for the most national flags drawn and national anthems identified.

He was recently invited on the gameshow ‘Manh ghep vui nhon’ (Playful Puzzle Pieces) and the second season of ‘Nhanh nhu chop nhi’ (Lightning Quiz Junior) to showcase his talent on television.

Despite some initial coyness when interacting with strangers on camera, he did not fail to deliver his knowledge in geography in the shows’ challenges.