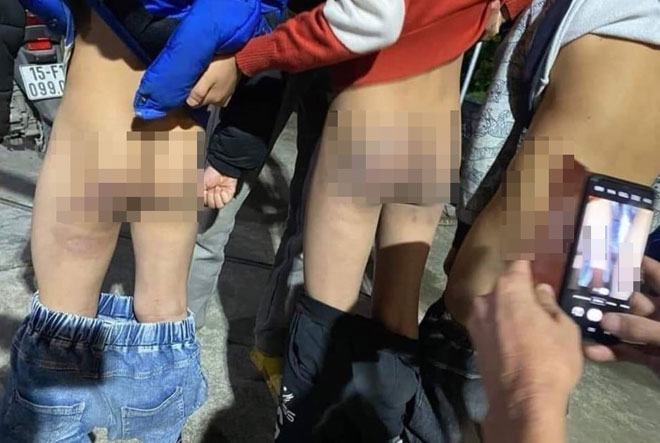 Authorities in Hai Phong City, northern Vietnam are urging functional departments to verify an incident in which a group of third-grade students from a local elementary school got their butts bruised by alleged corporal punishment for not doing their homework.

A Facebook post reporting the case, attached with an image of three children with many bruises on their buttocks, provoked a public outcry on Thursday.

D., who uploaded the post, told Tuoi Tre (Youth) newspaper later the same day that her younger brother and a number of his classmates, who are third-grade students at Ngu Doan Elementary School in Hai Phong’s Kien Thuy District, had concealed the bruises on their butts from their families for several days.

It was not until the families found out about the children’s bruises that they recalled their 24-year-old homeroom teacher Vu Thi H. and other friends, who were chosen as the class leaders, using a wooden ruler to hit each of them 70 times for not doing their homework.

After D.’s family complained to the school’s management board about the incident, H. came to D.’s house to apologize in person.

Contrary to the bruised children’s account, H. denied hitting the students, saying that they were beaten by classmates.

“All the children said that besides their classmates, H. used a ruler to beat them, so the teacher’s denial simply infuriated us,” D. said.

“I put the matter on social media to demand the competent authorities take serious action."

Le Cong Thiep, chief of the education division of Kien Thuy District, said that his unit is coordinating with other agencies to verify the case after receiving Ngu Doan Elementary School’s report about it.

The school’s management board affirmed that H. did not use a ruler himself to hit the students in question.

“But it’s possible that this teacher ordered the class members to beat them with a wooden ruler,” Thiep added.

Tutors to the poor kids in Vietnam

Thinking about the kids’ bleak future, Tra Hong Le and her volunteer tutors tell themselves that they have to try their utmost