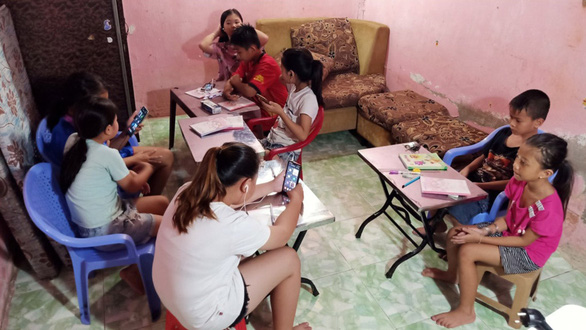 Tutors to the poor kids in Vietnam

The two kids and their three other siblings were living with their mother and grandparents who were both janitors.

The three-generation family was illiterate.

These kids could not go to school because they did not have birth certificates.

As Van Nhan and Bich Nhan were the eldest kids, they had to stay at home to take care of their little siblings while their mother and grandparents went to work.

The two kids are among many poor children who have to go to work with their parents or stay at home to babysit their siblings instead of going to school.

Their parents mostly earn their living by selling lottery tickets around local streets, working as a cleaner or a bricklayer.

She founded the 'Blue-Shirt Tutor' program co-hosted by YEAC and the Student Assistance Center (SAC) in 2018.

“Initially, volunteer tutors found it hard to do their task as many parents did not agree," Le said.

"Sometimes, they gathered to drink beer in their free time or beat their kids, making the space extremely noisy.”

After hearing tutors’ complaints, Le had to meet the parents for a discussion and she also egged on the tutors.

Le sometimes feels sad as her good will and the efforts of the volunteer tutors are rejected by the parents.

However, thinking about the kids’ bleak future, she and her volunteer tutors tell themselves that they have to keep doing this for them.

To help these kids continue learning, Le established the 'Family Learning Together' project.

It began in April 2021. Le felt so happy seeing her project supported by experienced teachers as well as young people.

Vo Dang Uyen, one of the volunteer teachers, quit her job as an English interpreter at the local Ton Duc Thang Museum to work fully for the project.

Each course lasts six months. A class has at least two students or a maximum of four students.

“Learning together helps family members feel more comfortable and confident when interacting with their teachers.

“Some of the students can talk with foreigners now.”

Hervey Taylor from the U.S. and Darren Smale from the UK, two foreign teachers attending the project, said the kids are always willing to learn despite their poor circumstances.