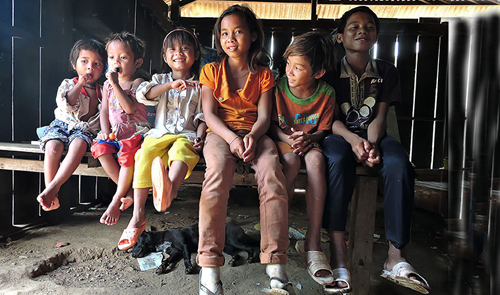 For over a year, six orphans have lived on the meager income of their 14-year-old brother, who collects tree sap in the forest to barter for rice and fish.

The children of the ethnic minority people Raglai have been abandoned by their father and left to live in a small hut in the hilly hamlet Ta Noi in Ma Noi Commune, Ninh Son District, Ninh Thuan Province in the central region of Vietnam.

Their father is an alcoholic and often assaulted his wife and children in fits of jealousy. Suffering the abuse for many years, the mother committed suicide over a year ago.

Immediately after her funeral, the father abandoned his children and only returned to visit them a couple of times over the past months.

Crying for their mother

The Ta Noi forest is pitch black at 7:00 pm except for a small hut lit by a yellow light from an oil lamp. It is the home of six Raglai brothers and sisters, the eldest a 14-year-old boy named Play Bao.

About three months ago, Play Thi Thon, the eldest girl at 16, told Bao that she could not stand their situation and left to live alone in her own hut, leaving her six younger siblings to live in the forest.

At night, the children lie in two small beds.

“Sa toan a hoay,” the young sister Play Thi Hong whimpers in her native language, which means ‘I miss Mom.’

Before falling asleep, Bao turned to his sister Hao, 12, to say, “remember to collect firewood tomorrow.”

The following morning, Hao carried two buckets of water from a nearby stream to pour into a big pot. Her young siblings Hong, Dao, Tit, and Chung rushed to scoop water out to quench their thirst.

Teacher Pi Nang He of the local primary school guided Tuoi Tre (Youth) newspaper journalists to cross Giang De Stream and four other streams and walk ten kilometers on rugged paths before arriving at the home of the children, located in a corner of a hill above a wide forest.

Ta Noi Hamlet has only a dozen or so households.

Gesturing to Hao, the teacher said she is afraid of meeting strangers after her father cut her hair too short while drunk.

Bao said simply about his father, “He left us long ago.”

Ca Mau Hien, Party Secretary of Ma Noi Commune, admitted that the story of the family is a sad one. The mother killed herself in the middle of last year when her youngest child was one year old.

“Local authorities were concerned about the case and warned the father, but failed to prevent the tragedy,” Hien added. “The wife died. The husband abandoned his children and only visited them a couple of times in the last year. He always beats them whenever he is drunk.”

Local authorities, neighbors and the children themselves all blame the father’s ignorance for their miserable fate.

Palay Thi Quyenh, a neighbor, told Tuoi Tre, “Neighbors wanted to help the father take care of his children, but he rejected any help. When he knew someone wanted to help, he threatened to set fire to his house.

Teacher Pi Nang He recalled that one day he entered the Ta Noi forest to search for Play Bao, who had been absent for many days. He saw the father holding a whip, forcing Bao and his brother Dao, a first grader, to carry a tree trunk to the local market seven kilometers away.

The children had to cross five streams to reach the market, the teacher added.

Every two or three days, Bao wanders around the forest in search of sap from ancient trees.

“You have to look carefully because when the sap discharges from the trunk of a tree it looks like a dried branch,” Bao said of the task.

In search of sap, he must climb trees that are over 10 meters tall. Within one morning, Bao climbs 20 trees to pick sap.

Returning from the forest, he stopped at a grocery store in his hamlet to sell a kilogram of sap for VND17,000 (US$0.8).

He already had rice at home so he used every cent to buy dried fish.

After dinner, Bao recalled stories of his mother.

When she drank pesticides to commit suicide, his father did not send her to the hospital but poured raw eggs into her mouth to induce vomiting. He only agreed to take her to the local hospital a week later.

But doctors failed to save her life after three weeks in the infirmary.

After his wife’s funeral, the father left, leaving the children to fend for themselves.