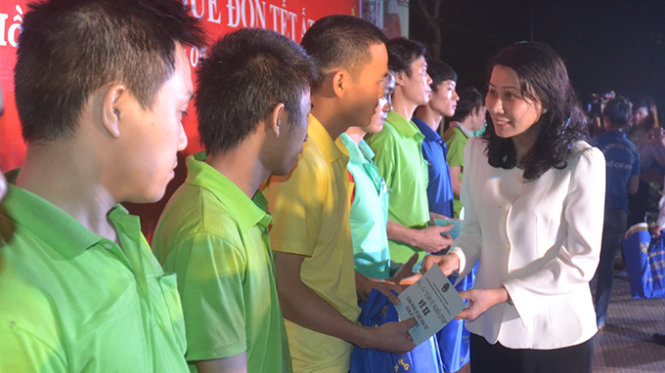 Vietnam workers fret over overdue pays ahead of Tet

While many receive sumptuous Tet bonuses, a large number of workers are vexed by having months of salaries being held in arrears and are increasingly concerned about how to spend the upcoming Tet (Lunar New Year.)

Many workers have been promised payments again and again, but they have received no or only parts of their salaries for several months on end or even up to a year.

The workers have repeatedly gathered at the company's headquarters for several days on end since early September last year. They shared they only received a small part of their salaries, between VND400,000 and 900,000 (US$18 to 42) since February 2014.

The company ceased operations in July, and owes around VND10 million ($461) each to many of the workers.

Phan Trinh Giang, one of the workers, lamented the company has not paid him several months' salaries, totaling roughly VND19 million ($876,) and expressed desperate hopes to be paid the sum to provide an adequate Tet preparation for his family.

Tet begins on February 19 this year, with festivity lingering on around one week after that.

With salaries being unduly late, Tet bonuses are a luxury for such workers.

Nguyen Vo Minh Thu, head of the labor management of the HCMC Export Processing Zone and Industrial Zone Authority (HEPZA,) told a January 2015 press meeting that around 15 companies who are plunged into financial difficulties are very unlikely to offer Tet bonuses to more than 700 workers this year.

In the past several days, dozens of workers at Ben Tre Transportation Works Construction Co. have also protested repeatedly against the company’s overdue debts in salaries and social insurance since early last year.

The company directorate gave in, but only made nominal payments before completely ceasing the payment in July last year.

Meanwhile, Tang Van Duc, board chair of Hao Duong Co., said the company is seeking ways to pay its workers parts of their salaries for the upcoming Tet.

The only aid provider the workers can turn to is labor unions.

According to Pham Ngoc Le, of the provincial Confederation of Labor, the confederation has provided 52 needy workers of Ben Tre Transportation Works Construction Co. with VND300,000 ($14) each. “We will also work closely with the provincial Department of Labor, Invalids and Social Affairs and the companies’ leaders to settle out the problem. If the companies refuse to do so, we will help workers take legal actions,” she added.

Nguyen Tran Phuong Tran, deputy chair of the Ho Chi Minh City Confederation of Labor, said her confederation has consulted the workers regarding the legal actions they can take against the companies.

However, the workers are not really keen on taking the matter to court, as a number have found new jobs and can’t afford the time to pursue lengthy court proceedings. Their scattering locations make it particularly difficult to gather them, Tran explained.