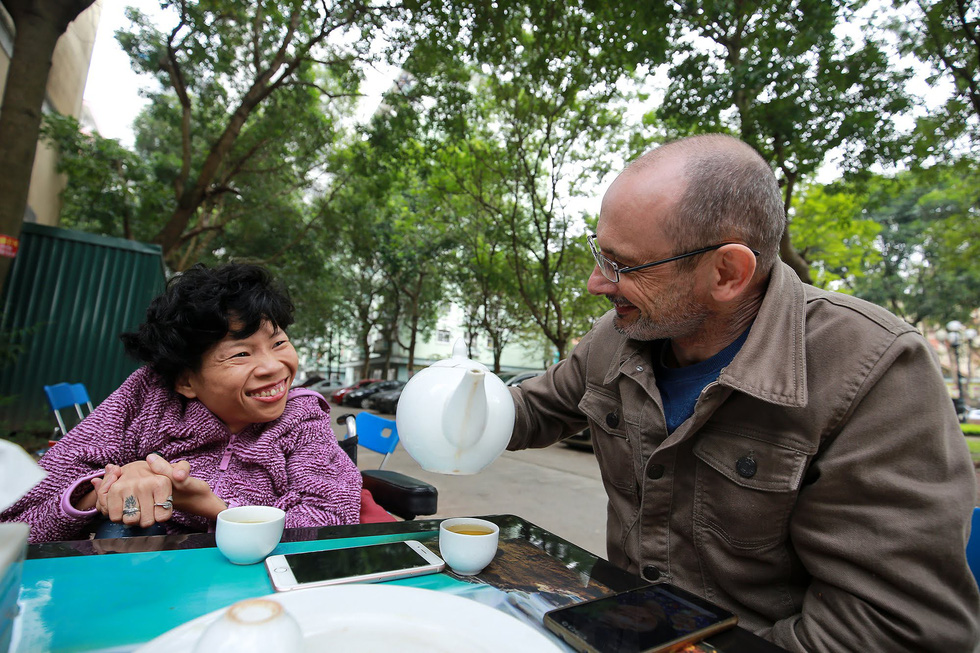 When Neil Laurence jokingly responded to his social media pen pal’s invitation for tea from his cozy home in Australia, he never expected it would lead to new life and new love in Vietnam.

“I’m drinking tea alone. Anyone want to join?” was the status Nguyen Thi Van, a wheelchair-bound Hanoian woman who heads The Will to Live Center in Hanoi – an organization which helps disabled Vietnamese integrate into the larger community – posted to her Facebook one lonely day.

Jokingly, Laurence responded to her post saying he’d “love to."

“OK. If you come to Vietnam, I’ll take you to drink tea every day,” Van answered.

Two weeks later, Laurence was on a Hanoi-bound plane ready to take her up on the offer.

“I was shocked that he came for me. I assumed he was just trying to meet up with me during a business or leisure trip he was taking [to Vietnam],” she said.

“I didn’t actually mean for him to take my invitation seriously.”

Laurence, a divorcé in his 50s, spent the rest of that first trip to Vietnam at Van’s side, refusing to go sightseeing if it was not in the company of his 20kg girlfriend.

“I came here to drink tea with her and look at her smile. She loves smiling,” Laurence told Tuoi Tre (Youth) newspaper in an interview.

Laurence returned to Australia after that trip ready to begin a new chapter in his life.

He quit his engineering job, packed his things, and three months later was on a plane back to Vietnam – this time for good.

“Van’s an interesting person. The fact that she’s confined to a wheelchair doesn’t matter. I wanted to begin a new journey with her,” Laurence said.

The couple has spent the last year living together and refusing to let Van’s disability affect their love.

Laurence takes Van wherever she wishes to go, does the shopping, and takes care of the housework for his wife – jobs that he is more than happy to do despite the responsibility characteristically falling on women in Vietnamese culture.

“Everyone has a choice for their own. They do what they feel happy about. I don’t think these jobs are for women only. Laurence doesn’t think so either,” Van explained.

When they decided to get married six months ago, Van’s parents were skeptical.

Eventually, however, they caved in and gave Laurence their blessing.

The two then got married but chose to skip a formal wedding despite the eagerness of Van’s family to celebrate the milestone.

“He feels as though he’s part of my family. He considers my family as his,” she said.

In marriage, Van said, Laurence is still just as caring as he was when he was trying to win her heart.

“I love you. I still love you today,” he says to her every morning.

Van spends a typical day working in their home while Laurence sits in the corner unable to take his eyes off her.

They visit friends and relatives in their spare time and meet friends for tea on the weekend.

To them, each day with each other is a blessing.

Whenever a problem arises, Laurence stays calm and reminds his wife that they need to live happily in the present because the future is uncertain.