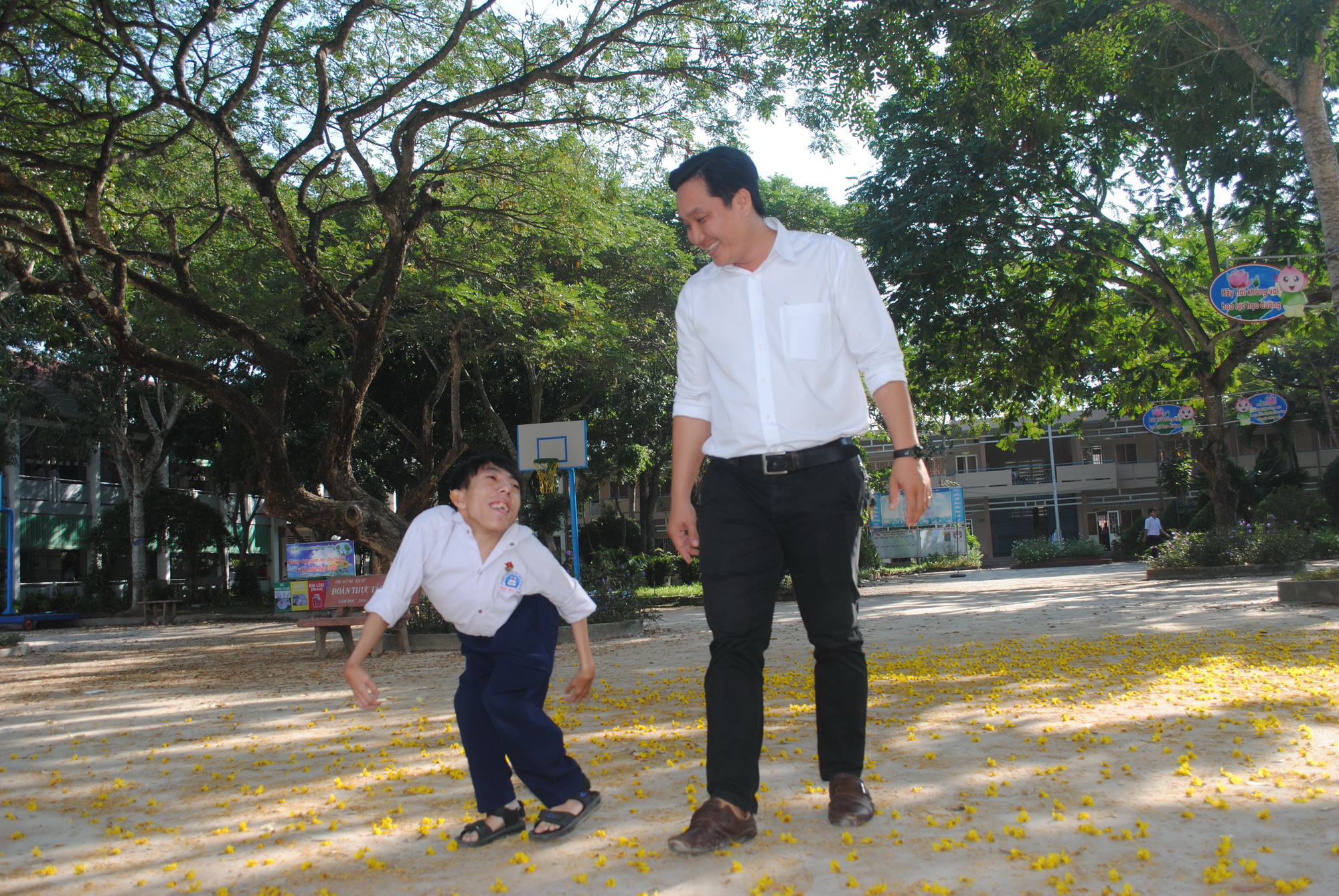 Strong-willed, ambitious, and studious are just a few of the words Deo’s teachers and family use to describe the driving factors behind his academic success in spite of his physical disabilities.

Vo Ngoc Deo was born with a congenital disorder that has caused a sharp curve in his spine, but the tenacious high school senior has refused to allow his physical defect to stand in the way of striving toward a future career as an IT engineer.

Currently enrolled at Lap Vo 2 High School in Lap Vo District, Dong Thap Province – an area with a staggering high school dropout rate – Deo’s success in the classroom has been nothing less than inspiring for his community.

Deo starts each day at 6:00 am with a baguette breakfast and a painful climb onto the back of a motorbike. For the past 12 years, his father and paternal grandfather have taken turns driving him to school each morning.

"The trio is a fixture here,” Nguyen Dinh Khanh, a local motorbike taxi driver who often waits for fares outside the school explained. “Many of Deo’s healthy peers quit school as soon as they learn how to read. It’s rare for anyone with a disability to finish high school. He’s got an iron will.”

Deo’s parents say he was about the size of a fully grown cucumber when he was born.

“His limbs began contracting only a few days after birth and I couldn’t ask for help from any pediatric hospitals until a few months later because I had no money and wasn’t really sure what was happening,” his father, Vo Ngoc Quyen, said.

By the time Deo finally made it to a pediatrician, his parents had been told there was little that could be done.

“Doctors said his bones had become too stiff to fix,” said Quyen.

The next few years was a haze of trips to a hospital in nearby Ho Chi Minh City so doctors could regularly monitor Deo’s condition. For a family from a poor town in the Mekong Delta, the medical bills were a heavy burden. Still, the hardship of handing over the family’s meager income to the hospital paled in comparison to the agony of watching doctors pull the young boy’s twisted limbs and fit his bones with braces.

“There were times I almost gave up, but Deo’s grandfather and I were determined to get him walking even with difficulty, no matter how hard it was to watch,” Quyen said in tears.

Foreign doctors often visit Dong Thap Province to offer free medical treatments to low-income families in the province, and Vo Van The, Deo’s grandfather, made sure to have Deo examined by each doctor who came through.

“They all told us to give up on the treatment, but we didn’t,” The said.

When he was five years old, Deo’s family had a local carpenter build a walker. His parents and grandfather were in tears when he used it to take his first painful steps.

A thirst for knowledge

Deo was never shy about his desire to attend school and, eventually, his family reluctantly agreed, despite their fears his disability would put him at a disadvantage against his peers.

As the years went by, Deo learned how to write using his tiny hands and quickly became known as one of the strongest students in class. By middle school, he was outperforming most of his classmates and has topped his class ever since.

“I’m not as fortunate as my peers, but I believe I can do everything my heart desires as long as I’m confident,” Deo shared. “I want to set an example to those like me and prove that people with disabilities can still contribute to society."

The first few years after Deo began attending school, teachers and classmates would offer to carry him to class on their backs. Of course, the strong-willed teen politely refused.

Nguyen Van Kiet, the principal of Lap Vo 2 High School, explained that he had once advised the family to send Deo to a school for students with disabilities so that he might have an easier time getting around. Once again, Deo politely refused.

Kiet has arranged for Deo’s class to study in a classroom on the ground floor of the school and has had desks and chairs built especially for him.

“Our school has several other disabled students, and Deo’s strong will and aspirations set an example to all of them. He has set a shining example to his schoolmates,” the principal remarked, adding that Deo has won several scholarships from philanthropists.

So, what is next for Deo?

“I wish to major in IT engineering but have yet to decide on a university,” Deo shared, adding that he plans to study either in Can Tho City or Ho Chi Minh City, but his parents want to keep him close by in case he needs their care.