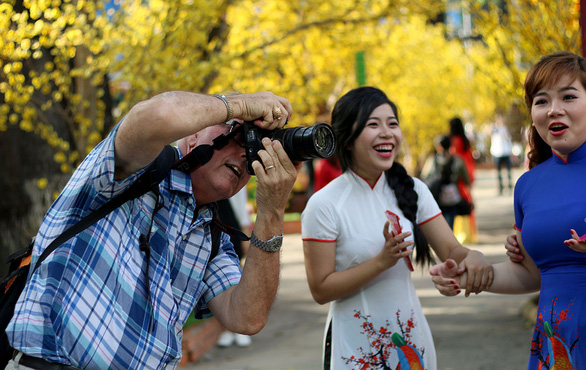 American expat Abadie has spent the last three decades photographing Vietnamese women donning the traditional dress in Ho Chi Minh City, where he has chosen to settle with a Vietnamese wife who also shares his love of photography.

It is not rare to catch Abadie roaming downtown Ho Chi Minh City taking photographs of local women in ao dai – a tight-fitting, long-sleeved silk dress worn with silk pants typically on national occasions, such as the Lunar New Year (Tet) holiday, or in schools and universities on particular days of the week.

After 30 years of photographing Vietnamese women, the walls of Abadie’s house in Binh Thanh District are now covered in his photos, with those that he has deemed not worthy enough to put on display filling the entirety of five portable hard drives.

To Abadie, the collection is so sacred he has even shipped two of his photo-filled hard drives to the U.S. for safe-keeping.

A picture says a thousand words

When he is not out asking ao dai-clad women to take photos, Abadie spends his time sitting with his wife, poring over pictures from his massive collection, reminiscing of the unique story behind each shot. The connection he feels to each photo is, perhaps, one of the main reasons why he rarely exhibits his work.

The photos are a rainbow, not just a collage of different colored ao dai, but a blend of Vietnam’s diversity.

Though many of his subjects are Kinh – an ethnicity that accounts for 85 percent of Vietnam’s population, Abadie’s work is, in fact, a celebration of the Vietnamese women of all ethnicities and from all walks of life.

The collection amounts to more than a million photos cataloging the evolution of style and street life in Vietnam, all centered around the country’s traditional dress, people, and landscape.

Each woman who allows him to take her photos is gifted an email account to access the pictures and a compliment spoken in Vietnamese.

Vietnam first made its way onto Abadie’s radar in April 1976, when he met his then-future wife, Tuyet Le, in New York City. According to Abadie, it was love at first sight. Soon, Le became Abadie’s first ao dai model and the couple would spend hours together taking pictures, with Abadie photographing Le in a white high school ao dai she had brought with her when she moved to the U.S. from Vietnam. It was not long before the two tied the knot.

In 1985, Le’s relatives visited the couple in the U.S., arousing Abadie’s curiosity about his wife’s home country.

Three years later, in 1988, Abadie and Le decided to try and visit Vietnam though, at the time, it was extremely difficult for Americans to obtain a Vietnamese visa.

Eventually, with the help of a tolerant ambassador, they were given permission to enter the country via Thailand.

On November 22, 1988, Abadie and Le touched down at Tan Son Nhat International Airport in Ho Chi Minh City and were astounded at the thousands of bicycles weaving their way through the city streets. Abadie was so enamored he immediately started snapping photos.

Between 1988 and 1995, the couple visited Vietnam for one month each year, during which time Abadie would take many photos of Vietnamese women in ao dai near the country’s popular tourist destinations and landmarks.

When Vietnam and the United States finally normalized relations in 1995, the couple made a permanent move to the Southeast Asian country where Abadie began work as a risk manager for a petroleum company.

“The friendly smiles on [the Vietnamese people's] faces have stayed the same over the last several decades,” he said.

When asked by an Australian traveler on a bus whether or not he liked Vietnam, Abadie’s response was simple: “If not I would have gone back to the States ages ago!”

Abadie is proud of the relationship he has kept with his ‘models’ over the years, and Le insists that she is more than happy that he has been pursuing his passion.

Le explained that she is not bothered that her husband prefers to take photos of other women, rather than using her as a model.

According to Abadie, he is fortunate to have a Vietnamese woman who understands him and has faith in his work.

To him, having a wife who shares his passion is life’s greatest delight.