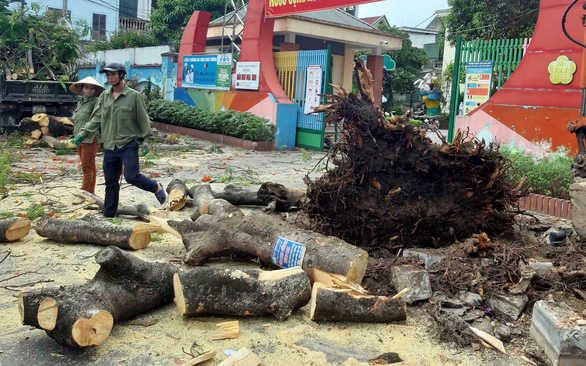 Schools in many parts of Vietnam have been cutting down big trees on campus after a series of incidents in which Royal Poinciana trees fell and injured students, including a fatal accident involving a sixth-grader.

The most serious case occurred at Bach Dang Middle School in District 3, Ho Chi Minh City late last month. One student was killed and 12 others injured after they were hit by an uprooted tree in the schoolyard.

After the accident, many schools started to prune and cut down trees over concerns of them falling and injuring students.

According to the observation of Tuoi Tre (Youth) newspaper reporters last week, many schools in Ho Chi Minh City have lost large swathes of their green space.

Huong Sen Preschool in Phu Nhuan District was one of the many schools that have suffered because of the campaign.

Parents bringing their kids to school were shocked to realize how many big trees on the premises had been trimmed to only three or four meters in height with sparse branches and even sparser foliage.

The same situation was also reported at Hoa Sen Preschool in Vinh, the capital city of the north-central province of Nghe An, as well as Phong Thanh Tay B Elementary School in Gia Rai Town in the Mekong Delta province of Bac Lieu.

The tree trimming and felling have caused a stir on local social networks with photos capturing axed trees on school campuses circulating and attracting comments about the necessity of all the 'tree massacre.'

‘Don’t kill them all’

T., a staff member from the Ho Chi Minh City Greenery Parks Company Limited, told Tuoi Tre that many of the felled trees were unnecessarily cut down as schools were ill-informed about which ones should or should not be cut.

A dendrologist who preferred to remain anonymous told Tuoi Tre that while it is necessary to ensure the safety of students, it is not right for schools to cut down all the big trees as it took years for them to grow and produce shade.

The expert emphasized the trees’ role in providing green space and a cooling effect in the schoolyard.

According to him, when a tree falls, the problem lies in how it has been taken care of.

“Instead of cutting down trees in the name of safety, we should hire professionals to take care of and examine them regularly,” he said.

“If schools cannot afford that, they could make supporting frames to prevent the trees from falling down."

Recently, Le Van Tam Middle School in Binh Thanh District has drawn public attention after photos of a 30-year-old Royal Poinciana tree in the schoolyard being supported by a metal frame to prevent it from falling down were posted on social media.

School principal Nguyen Anh Tuan said the frame cost VND6 million (US$260), cheaper than the expense to hire people to cut it down.

The idea of using a frame to support the tree was put forward by a staff member from the Ho Chi Minh City Greenery Parks Company Limited who was invited to come and take care of the trees on its premises every month.

Other schools in Ho Chi Minh City have also hired consultants before deciding on cutting down their trees.

Nguyen Vu Duc, vice-principal of Ha Huy Tap Middle School in Binh Thanh District, said his school had carefully considered what to do with their trees, taking into account the effort and time needed for a tree to grow.

Plus, trees on school campuses are embedded in the memories of many generations of students, he added.

After asking for advice from a professional agency, the school decided to prune ten trees while 'healing' two sickened others.

In the effort to protect both their students and trees, Marie Curie High School in District 3 has appointed staff in charge of taking care of trees in the school.

The assigned staff are responsible for alerting the school and getting consultations from professionals should they detect any problems.

Meanwhile, Ha Huy Tap Middle School in District 12 has collaborated with a team from a local reputable nursery who has come regularly to examine trees on its premises.

“During the rainy season, the team often comes five to six times a week to check the trees," said Nguyen Thi Thu Tram, vice-principal of the school.

Educators in other provinces have also expressed their interest in keeping green spaces alive at their schools.

Nguyen Huu Nhan, head of the political and ideological department of southern Can Tho City’s Department of Education and Training, suggested that schools in the area find ways to keep trees instead of cutting them down.

“Local schools are requested to urgently inspect all greenery and equipment related to student safety on their campuses,” he said.

The educator added that trees with high and broad crowns which are likely to fall should be pruned or supported with equipment at their base.

The education department of central Thua Thien – Hue Province has asked local schools to work with experts in preventing school trees from falling.

“I think we’re failing the trees if we impulsively cut them down,” said Le Nhu Chinh, director of Hue Green Park Center.

“It is necessary to have a specific assessment of a tree’s current state to give appropriate solutions."

Sharing the same opinion, Gia Rai Town Division of Education and Training in Bac Lieu Province has also asked local schools to examine all trees on their premises after the fatal incident in Ho Chi Minh City.

Bac Lieu officials said many schools had been pruning trees, but they had not yet received any requests from the schools asking for permission to cut down their trees.

“Our preference is to preserve the trees because it’s difficult for people to grow plants and the trees need many years to grow up,” said Trinh Minh Trung, deputy head of the Gia Rai Town educational department.

“It’s OK for local schools to prune their trees, but if they want to cut them down, they have to ask for the department’s permission."

Green care staff often observe if a tree has termites on its body or leaves turning yellow to determine whether the tree is sick.

“This is not a 100 percent efficient system because there are trees which look good on the outside but get rotten on the inside,” he said.

In 2013, the company test-used an 'ultrasound' machine to detect signs of pests and diseases but decided not to continue using it because of concerns over its efficacy.

Phuong said his company is working on some machines which could show images of underground roots to see if a tree is still healthy.

“We've found a company which sells the machines but owing to the ongoing novel coronavirus disease [COVID-19] pandemic, the company’s experts have not been able to come to Vietnam to show us how to use them,” Phuong said.