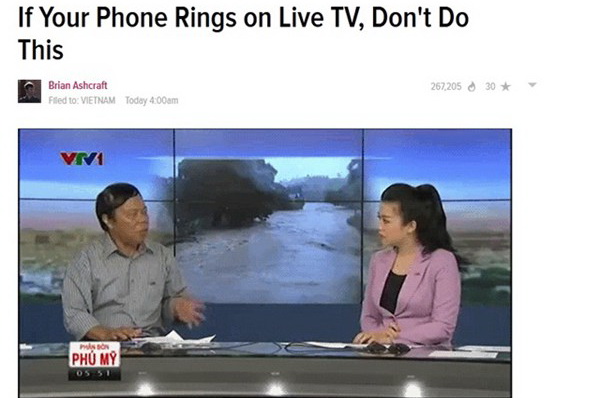 A video clip that shows a Vietnamese reporter throwing his ringing phone  on live TV has gone viral in both local and global media and social networks.

Seasoned journalist and reporter Sy Khoe was talking about the recent storms in northern Lang Son Province during a live news session on national broadcast station VTV on July 25 when his phone rang, much to his surprise.

After an awkward pause, the middle-aged reporter took his phone from his pocket and threw it to the side of the studio.

The phone made a loud noise when it hit the floor, causing Khoe to stumble over his words.

The 40-second video clip of the incident was posted on social networks the same day, raising mixed reactions from local netizens.

Some considered the incident a TV “fail” and criticized  the reporter as well as the national broadcaster for being “unprofessional.”

Others viewed it as a mere accident, and voiced sympathy and respect for the reporter, who has 16 years of experience.

At An Duong Vuong High School, students sit for exams outside their classrooms to ensure honesty and fairness

A terrapin whose patterns on its shell resemble a full human face has been found in central Vietnam’s Phu Yen Province. 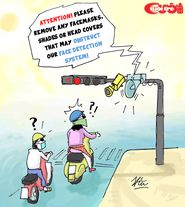