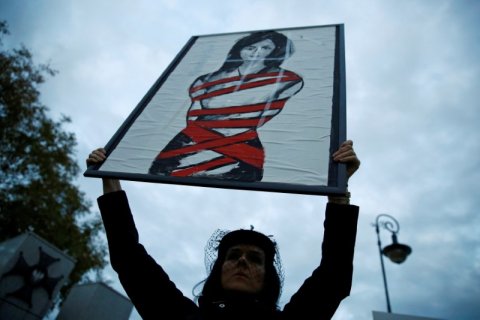 Globally, women's rights are in the crosshairs of rising isolationism and right-wing politics in Western Europe and the United States, where President-elect Donald Trump has promised to unravel an array of beneficial policies.

"There are major challenges facing women's rights coming up, not the least of which is a global cultural understanding ... that women are in essence second-class citizens," said Tarah Demant of Amnesty International USA.

"This is a global phenomenon," said Demant, senior director of Amnesty's identity and discrimination unit. "We are really worried."

Here are some of the biggest challenges to women's rights in 2017:

A threat to abortion access is the likely reinstatement of the so-called global gag rule under the Trump administration.

First imposed under former President Ronald Reagan, the rule prohibits groups getting U.S. aid abroad from providing abortions or counseling patients about abortions, even if their funds for those activities come from other sources.

The rule was lifted by President Barack Obama in 2009 but can be reinstated with the stroke of a pen.

Under the gag rule, many groups turned down U.S. aid, leaving them short of money for health services from cancer screenings to flu shots, advocates say.

The United States also could pull funding from the United Nations Population Fund, which provides access to reproductive health services but does not fund or support abortion.

Women's groups work around the world on such issues as divorce rights, gender wage gaps and child marriage, often operating in hostile environments on shoestring budgets.

Several countries have enacted laws pressuring such groups by making them register as foreign agents if they get funding from international donors, said Janet Walsh, acting director of women's rights division at Human Rights Watch.

At the same time, funding from U.S. government sources is likely to shrink, she said.

"I'm afraid for those who take a stand for women's rights, that their security and their ability to register and operate as organizations will be undercut," she said.

One in three women has experienced physical or sexual violence, most commonly inflicted by a partner, statistics show.

An estimated one in five will become a victim of rape or attempted rape, according to the United Nations, and high rates of femicide and domestic abuse grip many countries.

* Loss of United States as leader in women's rights

The U.S. government has in recent years played a key role in promoting and supporting women's rights, especially helping draw up global development goals approved by the United Nations, one of which calls for gender equality by 2030.

The IWHC intends to press governments not to cave to U.S. pressure to backpedal on women's rights, a strategy used during the administration of U.S. President George W. Bush that also sought to undermine women's rights, she said.

* Abortion rights in the United States

Trump will have an opportunity to name one or more justices to the highest court and has vowed they will be abortion opponents.

In the meantime, state laws are chipping away at abortion rights.

Texas lawmakers approved a law requiring burial of aborted fetal tissue, a measure estimated to cost hundreds of dollars per procedure, and Ohio signed into law a ban on abortions after 20 weeks.

"The number of abortions never goes down very much, regardless of the law," said Terry O'Neill, president of the National Organization for Women. "What does go down is the safety and affordability of abortions."

Trump has said he would appeal some or all of the Affordable Care Act, which has provided 25 million previously uninsured Americans with health coverage.

Known as Obamacare, it pays for most birth control methods for women.

"That funding, by enabling women to avoid unintended pregnancies, saves the federal government a ton of money that they would otherwise have to pay for medical care, pregnancy care, childcare etc.," said Ann Starrs, head of the Guttmacher Institute, a leading reproductive rights group.

Defunding Planned Parenthood, which runs about 650 women's health centers nationwide, was a battle cry of Trump during the presidential campaign and a favorite cause of Vice President-elect Mike Pence.

Planned Parenthood relies on public funding for at least half its revenue, much of it from the Medicaid health insurance program for the poor.

"To eliminate them as a provider either through Medicaid or the Title X family planning programs would leave millions of people in this country without regular health care," said Gretchen Borchelt, vice president for reproductive rights and health at the National Women's Law Center.