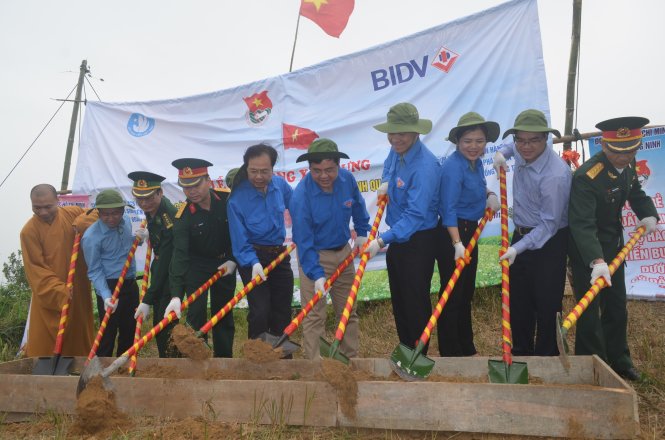 Sovereignty flagpole to be erected in northern Vietnam

The construction of a national flagpole that will serve as a marker of Vietnam’s marine sovereignty kicked off on Saturday in an island district off a northern province.

The Central Committees of the Ho Chi Minh Communist Youth Union and the Vietnamese Student Association started building a national flagpole to reiterate the country’s sovereignty on Tran Island, located in Co To District off the northern province of Quang Ninh, yesterday.

Its investors are the chapter of the Communist Youth Union in Quang Ninh Province and the Bank for Investment and Development of Vietnam, while its construction contractor is Dong Bac Corp. under the Ministry of Defense.

The flagpole will be located near a naval radar station, which is 188 meters above sea level – Tran Island’s highest spot.

Its base and foundation will be built from reinforced concrete and face the sea.

A flag measuring 4m x 6m and made of a type of sturdy cloth to withstand prolonged use in sea climate conditions will be hung on the pole upon completion.

The work is scheduled to be completed and inaugurated on May 19, on the 125th birth anniversary of late President Ho Chi Minh.

Members of the Central Committees of the Ho Chi Minh Communist Youth Union and the Vietnamese Student Association are seen joining an exchange with border soldiers on the way to Tran Island. Photo: Tuoi Tre

Co To is an outpost district which is located around 150 kilometers from Ha Long City, the province’s capital which houses part of the UNESCO-recognized Ha Long Bay.

It is made up of over 40 islets of various sizes and covers a total area of over 4,600 hectares.

Co To District is of great importance in terms of economic development, defense, and security.

The flagpole is one of those built on outpost islands stretching the country’s length including Bach Long Vy in the northern city of Hai Phong; Cu Lao Xanh in the central province of Binh Dinh; Hon La in north-central Quang Binh Province; Phu Quy in the south-central province of Binh Thuan; and Con Son and Tho Chu in the southern provinces of Ba Ria-Vung Tau and Kien Giang.

These flagpoles are aimed at affirming Vietnam’s sea and island sovereignty and improving the awareness of sovereignty protection among the public, especially young people.