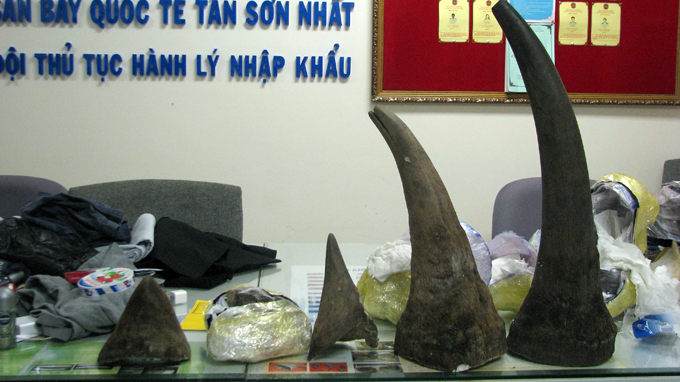 Accordingly, A Vietnamese man named V.C.L was caught red-handed hiding 5 African rhino horns and some pieces of rhino horns weighing about 13.1 kilograms in total in his luggage, according to the airport’s customs officers and officers from Police Department of Criminal Investigation in Economic Management and Positions (C46B).

Since rhino is listed as “critically endangered” in the list of world’s endangered, vulnerable, and threatened animal, the horns of rhino is banned from imported into Vietnam in any form following the Convention on International Trade in Endangered Species of Wild Fauna and Flora (CITES) and Decision No.11/2013/QD-TTg signed by the Prime Minister on January 24, 2013.

There’re currently around 28,000 rhinos left in the wild and the five rhino species mostly inhabit Africa and Asia. In 2013, up to 946 rhinos were killed for their horns in Africa alone.

According to the Wildlife Department under the Humane Society International, since the beginning of 2013, at least 746 rhinos have been killed for their horns in South Africa, which has the highest concentration of rhinos in the world. Many of the horns were transported to Asia, including Vietnam, according to the the Vietnam News Agency.

Meanwhile, more than 1,000 rhinos were poached for their horns in South Africa in 2013, a record number and an increase of over 50 percent from the previous year, Reuters quoted the spokesperson of the country's department of environmental affairs as saying.

Rhino hunting is driven by soaring demand in newly affluent Asian countries such as Vietnam and China, where the animal's horns are prized as a key ingredient in traditional medicine, Reuters reported.

The last rhino in Vietnam was killed in 2010, which is a tragic lesson in protecting wild species on the verge of extinction, VNA reported.