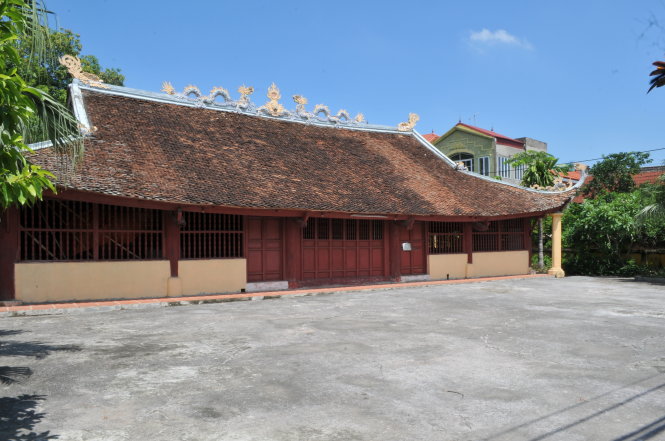 An ages-old wooden temple supposedly of historical importance in rural Hanoi was knocked down earlier this year and is being substituted with a concrete worship building, an incident that occasioned wistfulness amongst experts and involved finger pointing.

The destruction came to light only after relic researcher Nguyen Hoai Nam lamented in one of his recent Facebook posts that the temple dating back 300 years boasted great cultural value but earned no protection against the damage, for it had failed to be recognized as a national relic for unknown reasons.

Like many communal structures of its type across Vietnam, the temple, located in a village of Lien Bac Commune of the capital’s Ung Hoa District, worshipped a village founder from the feudal past.

Now at the site of the former temple stand a stone slab engraved with words calling for the structure’s preservation for posterity, and a concrete frame expected to be developed into a new temple.

The original structure was reduced to columns lying on the ground of a nearby location.

The temple won praise from a number of researchers for its architecture and décor.

Professor Tran Lam Bien said it was a beautiful temple of approximately 350 years of age with the relief steeped in culture and history, and surpassed many other temples designated as national relics.

The temple bore a close resemblance in design to another which was officially considered a national relic in 1962, said relic researcher Nguyen Hoai Nam.

Doctor Trinh Hoang Hiep felt deeply sorry that the 17th-century building had been demolished irrespective of its cultural, artistic and architectural value.

This reaction stood in stark contrast with the response by Nguyen Anh Tuan, chairman of the Lien Bac Commune People’s Committee, who looked surprised at the experts’ moans.

“The temple isn’t valuable whatsoever because it wasn’t regarded as a national relic site,” Tuan said, underlining that local people had repeatedly submitted their requests for the structure to acquire a heritage status in vain.

The constructive destruction, Tuan explained, was to preempt danger befalling the temple’s visitors since it was on the verge of collapse due to the severe damage caused by termites and white ants.

Repairs to the building were done as of 2016, Tuan added.

But researcher Nguyen Hoai Nam rejected the view that the temple was doomed to fall down, saying it had no supports during his visit in 2016 and predicting it would be able to survive over the next twenty years.

Now the fait accompli is raising questions about responsibility.

Truong Minh Tien, deputy director of the Hanoi Department of Culture and Sports, said officials in Lien Bac Commune were chiefly to blame.

They brought down the temple without permission from the department, Tien clarified.

It was worth noting, Tien said, that the district administration has been unaware of the temple’s demolition and failed to take timely action although the local government office building is only over one kilometer from the site.

The temple has been classified as a relic under protection, in line with a conclusion of a meeting by department officials on Monday, Tien added.