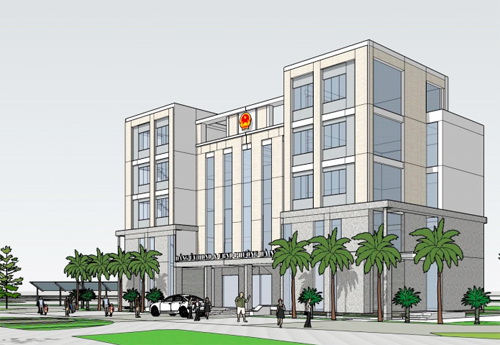 The Hanoi Department of Construction is currently working with the Center for Architecture and Urban Planning in order to come up with the most suitable uniform architectural structure for almost 500 public buildings at grassroots level.

On September 24, the department started gathering opinions on the design from Hanoi’s towns, communes, and wards.

The consulting center made several suggestions including the uniform design features and the area division.

The “uniform” of the buildings will each include a requirement regarding brand images, themes, standardized materials, and colors.

In terms of area division, the center suggests dividing the city into different areas, each of which will have different building designs with recognizable uniform features mentioned above.

For instance, in the city center, with the land area between 300 and 2,000 square meters, each office structure is allowed to be built on 70 percent of the land with the highest number of floors being six.

Meanwhile, other areas having a high population density with a land area of 880 to 3,900 square meters will be allowed to construct on 40 percent of the land with the highest number of floors being five.

Even though the design for 483 units of the Party, People’s Committee offices, and other public buildings in Hanoi has not been finished, many people have already expressed their disapproval and concerns.

According to a survey conducted by news site VnExpress on over 3,000 readers, 81 percent of the respondents did not support the uniform design as they believe it will reduce creativity, while only 19 percent were in support of the project as it helps people identify the buildings.

Theoretically it is impossible to replicate a design

Regarding the matter, architect Le Viet Ha shared with Tuoi Tre (Youth) newspaper his opinion on the proposed design.

Theoretically, it is impossible to replicate a blueprint and implement it on several constructions as each land, location, and construction needs to be designed so as to be suitable with its surroundings including climate patterns, geographical conditions, and culture.

Even though the department said it aims at unifying the identification image of the public buildings, rather than the design itself, Ha is still not convinced.

“It is even less possible to have regulations on the materials as each design requires different ones,” the architect said.

“Even if the same blueprint is used, the same materials might not be suitable.

“Each construction should hold an individual bid so as to choose the best material supplier.”

The need for diversity

According to architect Nguyen Thanh Tung, a member of the Vietnam Architects Association, the project has both benefits and drawbacks.

One design for all buildings will make it easier for people to recognize public entities thanks to their common features.

Moreover, only one blueprint is needed for all buildings, which will save a lot of time and manpower usually needed for designing, according to VnExpress.

On the other hand, a uniform design will cause a loss to each region’s identity and distinction.

It is important for buildings to be designed so as to be suitable with each surrounding and culture of that area.

Hanoi is a city of various cultural values, which need to be preserved and highlighted.

Unifying the buildings in structure, design, and color will cause the loss of several cultural displays.

Hence, Tung suggests making designs to represent each region while still depicting the formality of the building and friendliness to the people.

Writer Nguyen Ngoc Tien, who has a good understanding of architecture, strongly expressed his disagreement with the current project when deeming it “unnecessary.”

According to the writer, many public units were built before 1954 and had a diverse structure, implying the buildings are not just touristic landmarks which identify each locality, but also hold a historical value.

Each structure should be carefully considered in order to guarantee its practicality, esthetics, as well as cultural value, Tien said.

Therefore, implementing a “one design for all” policy will cause the loss of diversity, flexibility, and creativity of each locale.

Hanoi has already used a common design for all police buildings.

However, police buildings represent the order, law, and peace so the uniform design is perfectly suitable.

The same cannot be said of the People’s Committee offices and other public structures as they should represent the people of that area, the writer pointed out.

Architect Tran Huy Anh, a member of the Hanoi Architects Association, said the project goes against the world’s effort to diversify.

The world is developing in the direction of diversity in agreement, not unification of culture, Anh stated, adding it is an “old and wasteful” idea, failing to have any cultural and economic benefits.

Moreover, Hanoi has a limited budget and many other more important constructions also need to be invested in.

“These are not privately owned money so all spending like the one mentioned above needs to be thoroughly reported to the people in terms of social, cultural, and economic benefits, as well as its final purpose,” the architect underlined.