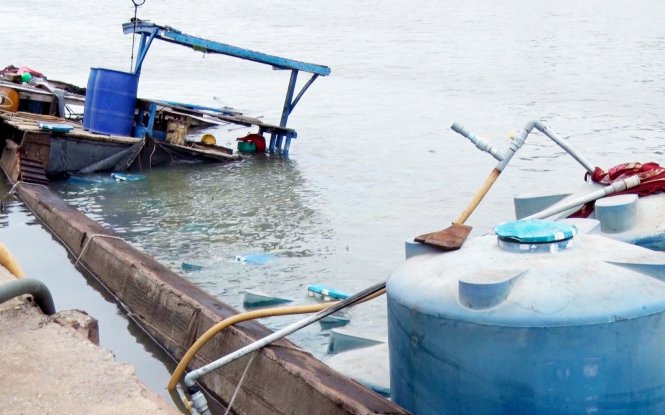 A ship carrying 26 metric tons of hydrochloric acid (HCl) sank in the Dong Nai River in southern Vietnam on Sunday as authorities say they have recovered all the chemical volume from the vessel before any leakage.

The boat, captained by Nguyen Van Be, 43, was filled up with the acid at a river port in Dong Nai Province, which neighbors Ho Chi Minh City, in the early hours of Sunday.

The strongly acidic chemical was produced at a chemical factory in Bien Hoa, the capital of Dong Nai, and was to be transported to provinces in the Mekong Delta region for sale.

While hydrochloric acid was being pumped into 20 drums, capable of holding five mertic tons of liquid each, on board the wooden ship, water began to enter the vessel through a hole in its bottom.

Within minutes, the ship became submerged as water filled its deck.

Around 26 metric tons of acid had leaked into the drums by the time the boat sank.

Any leakage of the chemical will pose a hazard to the Dong Nai River, water from which is used to supply residents in neighboring Ho Chi Minh City.

There are a drove of fish farms located near the site of the wreckage, raising safety concerns among the farm owners.

Authorities recover acid from a boat that sank in the Dong Nai River in Dong Nai Province. Video: Tuoi Tre

Four tank trucks were sent to the site to recover the acid from the ship, and by early Monday morning authorities said they had recovered the entire amount of the chemical stored in the containers on the vessel in distress.

There has been no report of any leakage, as the containers are still tightly sealed, according to officials.

Dong Nai police and the provincial Department of Natural Resources and Environment have formed a joint working group to investigate the accident.

Initial findings show that the boat, built from wood, was in a state of serious degradation, causing its wooden planks to give way and let water in.