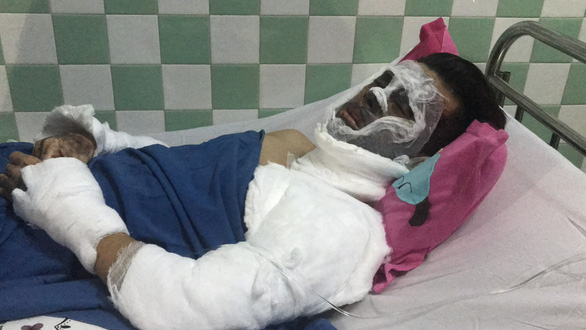 Viet Kieu attacked with acid while celebrating Tet in Vietnam

An overseas Vietnamese man was attacked with acid and sustained knife wounds in his legs in an assault by two unidentified men while celebrating the Lunar New Year (Tet) holiday in the south-central province of Quang Ngai.

Vo Duy Nghiem, 26, who lives in Canada, returned to his hometown in Binh Dong Commune, Binh Son District, Quang Ngai Province on January 31 to honor the Tet holiday with family and friends.

He was accompanied by his 26-year-old girlfriend, Nguyen Thi Ngoc Tram, also a Viet Kieu living in Canada.

Preliminary information showed that Nghiem and Tram were on a motorbike at around 8:00 pm on February 9, the fifth day of the Lunar New Year, when two masked men approached the couple on a motorcycle.

The unidentified men splashed acid on Nghiem before severing his Achilles tendons and the tendons behind his knees with knives before fleeing the scene.

The victim suffered severe burns across his face and body.

Tram was slightly burned by the acid as she was sitting at the back of the motorbike.

Nghiem was later brought to a hospital in the central city of Da Nang.

Doctors at the infirmary stated that the burns on his face are the most serious and that his eyes might be permanently damaged.

Speaking to Tuoi Tre (Youth) newspaper at the hospital on Thursday afternoon, Nghiem said he has lived in Canada for five years and owns a nail salon there.

Before the incident, Nghiem and his family were en route to dinner at a local restaurant.

He let his family take a car while he traveled to the venue with his girlfriend by motorbike.

It was during that trip that he was attacked on a secluded street along the Khe Hai Beach.

“The attackers were prepared. It all happened so fast,” Nghiem said.

A source told Tuoi Tre that Nghiem had previously had conflicts with his older brother, who also lives in Canada.

The victim believed the brother, who was also in Quang Ngai for the holiday, was behind the assault, the source added.

Police officers tried to impose an exit ban on the suspect but he had already returned to Canada.