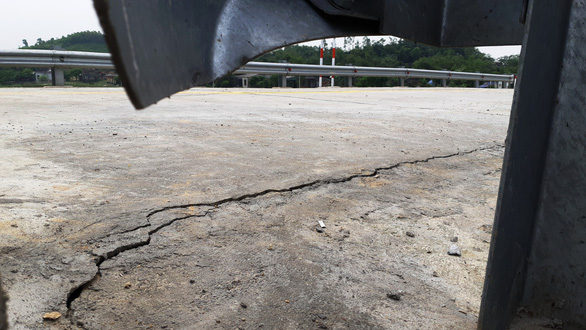 Multiple cracks have been discovered along a VND77 billion (US$3.3 million) road and bridge project in the north-central Vietnamese province of Ha Tinh, only four months after the infrastructure was put into operation.

The project consists of Vinh Bridge, which cost more than VND30 billion ($1.29 million) and 4.6 kilometers of road, which is worth approximately VND47 billion ($2 million), in Ky Tho Commune, Ky Anh District.

The construction was aimed at providing proper traffic infrastructure for people in the flood-stricken locality.

Developed by authorities in Ky Anh District, the project was initiated in August 2017 and complete in December 2018.

According to the observation of Tuoi Tre (Youth) newspaper, many fractures can be spotted along the road section near Vinh Bridge.

Some cracks are up to three meters long, while the most serious fractures could be seen at the junction point between the road and one end of the bridge.

Vo Xuan Thanh, deputy head of the project’s management board, confirmed that a team of personnel has been tasked with inspecting the cracks.

The management board is working with relevant units to determine a solution to the problem.

A nearby lake is currently used for aquaculture, which may affect geological features in the area, Thanh said, adding it could be the reason behind the cracks.

An official from the provincial Department of Construction stated that the agency would also join hands to examine the infrastructure and figure out the exact cause.