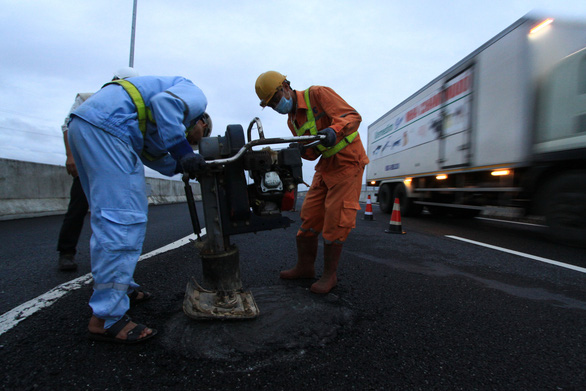 Vietnam to set up project to repair pothole-riddled expressway

A 139-kilometer-long expressway linking Da Nang to neighboring Quang Ngai Province, which became run-down shortly after opening, is expected to be under extensive repair through the formulation of a project.

In a report to Prime Minister Nguyen Xuan Phuc, the Ministry of Public Security (MPS) presented its findings of a serious construction mismanagement case involving the Vietnam Expressway Corporation (VEC) in the construction of the expressway.

The MPS suggested the head of government assign the Ministry of Transport to put together a council in charge of a project to repair the expressway.

Once in place, the project will make it possible for the MPS to assess construction damage caused by those individuals and organizations involved.

The four-lane expressway was developed in five years by the state-run VEC at a total cost of VND34.5 trillion (US$1.7 billion), funded by government bond sales and loans from the World Bank and the Japan International Cooperation Agency.

Touted as an artery road linking major economic centers, the expressway saw numerous parts riddled with potholes, some measuring up to half a meter wide, just several weeks later.

At least nine former executives and chief contractors in connection with the Da Nang-Tam Ky section were accused of irregularities in the construction and work approval of the expressway.

Investigators alleged that contractors and inspection consultants had failed to meet technical and design criteria for the expressway, and had even flouted regulations on construction, leading to serious consequences

The VEC was previously authorized to collect tolls from vehicles traveling on the expressway for 24 years starting 2018 under the build-operate-transfer financing model, with fares ranging from VND180,000 (US$8) to VND790,000 ($34) per vehicle.

22 hours ago
Features the expat files