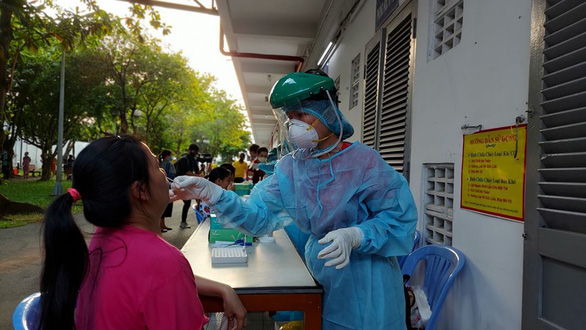 Vietnam’s Ministry of Health documented five imported COVID-19 cases and 22 recovered patients on Wednesday, while recording zero domestic infections for the seventh day in a row.

The imported cases’ ages fluctuate between four and 60 years old.

The five, all Vietnamese, arrived at Tan Son Nhat International Airport in Ho Chi Minh City on the same flight on September 1.

They were sent to a collective quarantine center in Ba Ria-Vung Tau Province, about 100km from Ho Chi Minh City, upon entry.

They tested negative for the novel coronavirus on September 3. Their retest conducted by the Pasteur Institute in Ho Chi Minh City proved positive on Wednesday.

The health ministry recorded no community-based coronavirus cases for the seventh consecutive day on Wednesday.

It announced 22 recoveries the same day, including 10 patients in Da Nang, four in neighboring Quang Nam Province, four in Hanoi, two in southern Bac Lieu Province, and one in the Central Highlands province of Dak Lak.

Vietnam has reported 1,054 coronavirus patients, including 691 domestic infections, since the virus first hit the nation on January 23.

The number of recoveries has reached 890 while 35 have died as of Wednesday night, most having suffered serious underlying conditions.

A total of 551 locally-transmitted cases have been logged since a new wave struck Vietnam on July 25, when Da Nang confirmed the first community transmission after the country had gone 99 days without documenting a single local infection.

Most of these domestic cases have been traced back to Da Nang, a tourist hub on the central coast.

Ho Chi Minh City authorities have said those coming to the city from Da Nang from September 5, when the beach city started easing social distancing restrictions after having contained the new outbreak, will have to declare their health status, monitor their health for 14 days, and undergo a COVID-19 test.

People who come to the city by other means of transportation will be required to declare their health conditions and to have their samples taken at places designated by local medical centers.