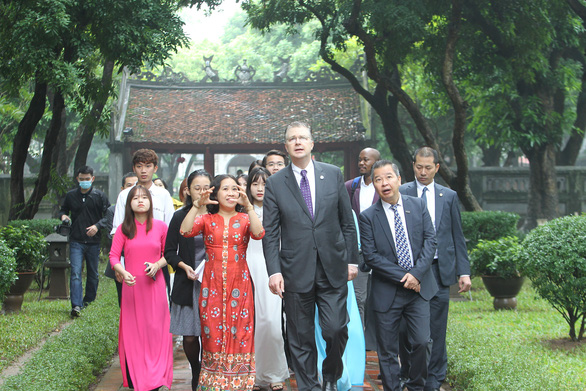 Kritenbrink’s visit to the temple was meant as an act of respect for the upcoming celebration, scheduled for November 20.

During his visit, the U.S. envoy visited Khue Van Cac (Pavilion of the Constellation of Literature), Khai Thanh Temple, Thuong Dien (High Palace), and the Doctor’s stone tablets – a place which features those who successfully passed the royal exams.

He also offered incense sticks at the altar of Chu Van An – a prominent cultural figure in Vietnam’s feudal era – and answered questions from the press.

The visit was guided by historian Pham Quang Minh.

In remarks to press representatives, Kritenbrink mentioned Vietnam’s passion for learning as part of the local culture.

He discussed Chu Van An – one of Vietnam’s four World Cultural Celebrities as recognized by UNESCO.

During this year’s Teachers' Day celebration, an exhibition of Chu Van An’s life and work will be held inside the Temple of Literature to commemorate the 650th anniversary of the Vietnamese icon.